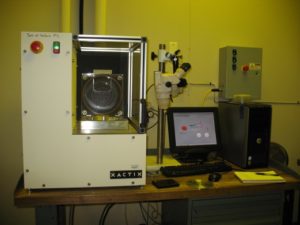 The Xactix XeF2 e1 system is a dry silicon etcher in which vapor phase XeF2 etchant gas is used for isotropic etching of silicon and releasing MEMS microstructures. XeF2 exhibits high selectivity to silicon over other materials including photoresist, silicon dioxide, silicon nitride, and aluminum. Since XeF2 etching is a chemical diffusion process and carried out at a controlled temperature, it avoids many of the problems associated with wet or plasma etch processes. Since the etching is isotropic, large undercuts of structures can be produced in silicon. Other sacrificial materials or layers, such as polysilicon, amorphous silicon, single crystal silicon, molybdenum, germanium, tungsten, etc., can be etched.