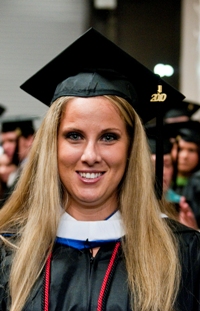 Gaspar is one of 861 Louisiana Tech graduates who received degrees Saturday presented by President Dan Reneau, who told students they would never forget the significance their college graduation would have in their lives.
Seven years ago Gaspar had never been to the United States nor could she speak English.  Saturday, the native of Romania who is now a permanent U.S. resident, earned her Master of Arts degree in English during Louisiana Tech’s spring commencement.
The only blight on Gaspar’s jubilation is that her parents, Dana and Mircea Gaspar, who live in Romania, were not here to share the moment.
“I’m really close to my mom, and I really wanted her to be here for graduation,” she said.
Gaspar’s parents have never visited America even though their daughter has been in the states attending college since the fall of 2004.  Her mother has twice been rejected for a visa—even to attend Tech’s commencement.  Gaspar said her mother has a third interview for a visa in June and hopes this time will be the charm.
Gaspar, whose native language is Romanian, earned her Bachelor of Arts in French from Tech in 2008.
“In Romania and throughout Europe, children are introduced to another language as early as kindergarten,” she said.
But Gaspar, a tennis player since age 9, said she was more interested in creative subjects and was allowed to study art instead of a second language through junior high school.  Gaspar began her French studies in high school.
It was at tennis training the summer between her junior and senior years of high school that she met many tennis players who told her they planned to attend college in the United States.  Gaspar decided that was what she wanted to do, too.
“I had never visited the states before and knew nothing,” Gaspar said.  “But I told my parents, the first school that sends me a scholarship, that’s where I’m going. I never took one class in English until my senior year of high school.”
Within six months of Gaspar’s decision, she had to successfully complete the SAT and the TOEFL (Test of English as Foreign Language) in order to get a student visa and complete the process in time, which she did.
Like Gaspar, Tech’s spring commencement speaker Rosemary Ellis was unafraid to venture out of her own comfort zone—something she encouraged the Class of 2010 to try.  She left the comfort of North Louisiana immediately after her own Tech graduation in 1983 for the Big Apple.  Today, Ellis is the editor-in-chief of the country’s largest women’s magazine, Good Housekeeping.  She was also honored as this year’s inductee into the Louisiana Tech University Hall of Distinguished Alumni. 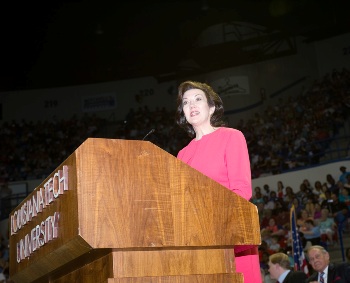 Ellis shared with the graduates her “Secret Rules of Adulthood.”
“Practice counts,” she said.  “It astounds me how rare real confidence is and that comes from practice.”
Putting time into whatever you are doing is imperative, Ellis said.  And don’t compromise in times of moral dilemmas.  “Chance favors the prepared mind,” she said, urging graduates to lives like the person they aspire to be and to look for their passions.
“Don’t waste the biggest chunk of your life doing something you don’t think is important,” Ellis said.
Ellis said being in charge of the biggest magazine, having a nice office and nice salary, and meeting famous and powerful people is great fun, but it isn’t why she does her job.
“It’s the icing—it’s not the cake,” she said.  “I love the day-to-day, rolling up your sleeves editing of the magazine.  The icing is nice, but don’t confuse it with the cake.  The cake is what you would do even if they didn’t pay you.”
Take risks and don’t be afraid to fail, Ellis said.
Gaspar already practices several of the rules Ellis preached in Saturday’s ceremony, and she plans to move to Washington, D.C., and pursue her passion working to better relations between Romania and the United States.
In addition to playing tennis for Tech and tackling two foreign languages’ curriculum during her tenure as an undergraduate and then a graduate student, Gaspar also found love.  Her husband, Flaviu Tomuta, who is also a native Romanian, became a U.S. citizen in 2007 and currently works in Washington, D.C.
“We met three times before starting to go out,” Gaspar said.
First, the pair met in a Paris airport in 2005 on an 8-hour layover, then again in the Bucharest airport.  Finally, they bumped into each other again in Deva, Romania, Gaspar’s hometown, and decided to tempt fate no longer.  They married in August 2006, and Gaspar is considering pursuing another master’s in international affairs or foreign policy at George Washington University in a year.
But no rest is in sight any time soon for the newly degreed master of English; Gaspar will begin a summer internship at the Romanian Embassy June 10. 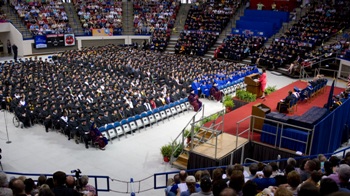 Gaspar said she has experienced so much during her time living in North Louisiana, including visiting 40 states, and she is OK not knowing exactly what the future holds or where she might settle down.
One thing is sure, Gaspar will continue to follow many of Ellis’ rules for adulthood while creating some of her own.
“When I came here, I didn’t think I would go for my master’s; there was no husband in the picture at all,” she said. “The States are a melting pot of so many nationalities and cultures.”
She hopes that she has and will continue to build a more understanding and educated relationship between the United States and her homeland.