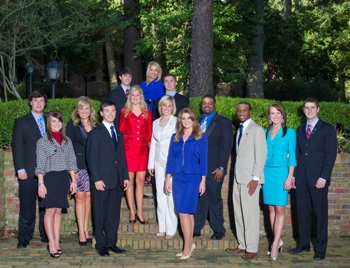 Student Government Association student affairs director Dijana Coric said lead escort and queen, the male and female with the most votes, will be announced at the pep rally Friday at Joe Aillet Stadium.
Coric, a senior biology major, said the process of making the Homecoming Court ballot involved a nomination by an organization, an application, which lists students’ accomplishments and campus
involvement, and if chosen, an interview with faculty and staff representatives.
“Each individual’s application goes through a screening process. There are six judges (Tech faculty/staff) who follow a strict point system when screening each individual’s application,” she said. “The 20 girls and 20 guys who have the most points after the screening process get an interview.”
Applicants receive points during their interviews. Points from the screening process make up 40 percent of their total while the interview makes up 60 percent.
From there, the 12 men and 12 women with the most points get on the ballot. The student body votes and the seven men and seven women with the most votes are elected to Homecoming Court.
By Kelly Belton, news editor for The Tech Talk