Three hundred twenty-eight graduates received diplomas at Louisiana Tech’s commencement ceremonies held Saturday, Nov. 20 at the Thomas Assembly Center. Included in the graduation class were the first 14 graduates of Tech’s executive MBA program.
Stuart Snook and his brother Keith Snook, both of Frisco, Texas, were two of the executive MBA graduates and drove to Shreveport every other weekend during school sessions for two years for their degree. 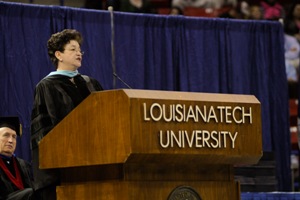 Stuart Snook said he had always wanted to get his master’s, but he couldn’t find an online degree program that seemed credible, and the ones available around the Dallas area were too expensive.
“I was in Ruston for a football game, and I saw Dr. Douglas Amyx,” Snook said, referring to the College of Business’ associate dean of graduate studies and research. “He gave us details, and I talked to my brother. We jumped in.”
Since Snook and his brother started the program, he said they have started an industrial distribution company with their father, and what they learned in class has been helpful in their business.
“The timing is good,” he said. “They’re talking about things we’re facing. All those things the professors talk about happen in the real world.”
The commencement keynote speaker, Dr. Mildred Gallot, a member of the Board of Supervisors who received her master’s in education from Tech in 1968, mentioned the 14 EMBA graduates in her address and said that all of the students who were receiving degrees from the university have had access to many technological aspects.
“Louisiana Tech is constantly striving to move forward despite the budget crunch,” Gallot said. “Look at the new business building and Research Park.”
With their education, Gallot said she hoped the graduates would be an asset to society.
“There is so much that needs to be done in our world and in our backyard,” she said. “Take with you your youth, your knowledge, and your skills to make an impact on society.” 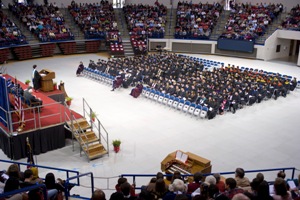 Katie Beth Cheshier, of El Dorado, Ark., will take Gallot’s words to heart and hopes to help others through her education. Cheshier graduated with her master’s in speech pathology.
“I initially wanted to work with kids, but I enjoy my job with adults,” said Cheshier, works at Willow Ridge nursing home in Arcadia. “Tech prepares you for both.”
Colin Bailey, a Homer native who received his bachelor’s degree in psychology, hopes to make an impact after graduate school. He said he intends to pursue Tech’s master’s program in counseling in the spring.
“I learned a lot about the faculty here as an undergraduate,” Bailey said. “They’re really good, and the program is really good. I love Tech. My parents are alumni, and my grandparents are, too. My aunt was a Lady Techster. Basically everyone in my family went to Tech, and I followed in their footsteps.”
Above all, though, Gallot encouraged the graduates to maintain their integrity.
“Your personal integrity is in your hands and can never be taken from you,” Gallot said. “Commencement means beginning. As you leave this ceremony, you will begin the rest of your life.”