On a typical Thursday, the Louisiana Tech Lambright Blue Gym is filled with college students playing basketball or doing aerobic exercises.
This Thursday, however, it was filled with senior citizens playing bingo, hula hooping or tossing beanbags. 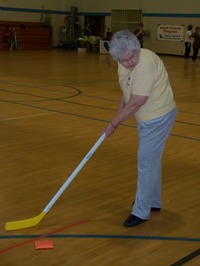 The Winter Games were part of a serving learning class project for Rhonda Boyd’s Kinesiology 406 Health Aspects of Aging. The students in the class planned the entire event from start to finish, she said. They collected equipment, raised funds, and found citizens and businesses to donate prizes.
“It went perfectly,” said Boyd, an instructor of kinesiology, when describing the 3rd annual Winter Games. “The seniors and our students seemed to have a great time. It was a huge success.”
Boyd has been at Louisiana Tech University for eight years and said she believes that there is more to learn than can be taught in a classroom.  The KINE 406 Winter Games went right along with Tech’s commitment to getting out into the community and doing hands-on service learning.  Louisiana Tech was named to the 2009 President’s Higher Education Community Service Honor Roll because of its continued growth in this area.
The event was held from 8:30 a.m. until noon and attracted more than 130 people from the area.
“I think it helps dispel a lot of the myths,” Boyd said. “A lot of people think they can’t do new things and that they don’t like to compete. That’s not true. They’re just older.”
Todd Castleberry, a graduating senior majoring in clinical kinesiology, agreed.
“It’s great to see how much they enjoy it,” Castleberry said. “They compete just like teenagers, but with a smile.”
Vickie Benefield, 73, had a wide smile when discussing the games.
“It’s just a great way to have fun and see how coordinated we still are,” Benefield said with a laugh. “My favorite is the spelling bee.”
Castleberry joked that the older ladies must be doing a lot of crosswords because they are good at spelling.
Boyd said she believes that giving students an opportunity to be around older adults gives them skills they will be using in their professions. 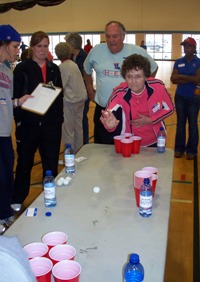 “Most everyone in the class will be in a med-related field,” Boyd said. “This service-learning project allows them to get experience.”
Kinesiology major Amy Shrader said Boyd does a great job at putting you into an older adult’ shoes.
“The exercises we do in class and the service learning project prepares us for when we’re older,” Shrader said. “We learn how to organize activities and deal with seniors.”
Students in the class agreed that the event was a major success.
Another participant, Charles Monson, 85, had fun without competing.
“I just like to watch,” Monson said. “I think they (students) do good and I appreciate them. There’s always a free lunch.”
Boyd said she is intent on keeping the Winter Games as the service-learning project for her Kinesiology 406 classes in the future. She said the seniors keep asking and just can’t get enough of it.  And the community businesses really support the effort.  Donors included Wal-Mart, Super One Foods, Starbucks, and Dani Jones Physical Therapy. Berry Plastics in Homer, Subway in Calhoun, Sonic, WOW, Celebrity Theatres, Blockbuster, Community Trust Bank, the Dawg House and the department of kinesiology.
Students who participated included:  Jodi Albritton, of Ruston; Bailey Austin, of Athens; Dan Breazeale, of Alexandria; Hodson Brown, of Minden; Clay Canterbury, of Haynesville; Todd Castleberry, New Roads; Kathryn Chreene, of Shreveport; Leah Crowe, of Wylie, Texas; Megan Cruse, of Quitman; Xandy Delaney, of Gonzales; Collin Ellis, of Columbia; Lee Michael Estes, of Columbia; Geoff Gardner, of Dubach; Alyson Goeders, of Shreveport; Kiara Hicks, of Shreveport; Marcus Hicks, of Shreveport; Lori Hunsucker, of Katy, Texas; Brandon Joseph, Terrytown; Victoria Kamphuis, of Shreveport; Sydnee Lincoln, of Shreveport; Rachel Marcus, of Ruston; Kristen Martin, of Dubach; Morgan Martin, of Shreveport; Audreuna McCarter, of Ruston; Aqunette Morris, of Natchitoches; Jacob Navarro, of Haughton; Cornelious Nickelson, of Bossier City; Beth Plummer, of Bossier City; Erin Rawson, of Pineville; Ragan Rucker, of Shreveport; Will Sanders, of Monroe; Maria Santini, of Slidell; Ian Scurlock, of Schriever; Sydney Sehon, of Ruston; Amy Shrader, of Alexandria; Caleb Smith, of Eunice; Daniel Steed, of Ruston; Chad Stewart, of Bossier City; Rendi Ward, of Minden; Stanley Washington, of Shreveport; Jade Watson, of Shreveport; Benji Webb, of Sugar Land, Texas; Chelsea White, of Lucas, Texas; and Lakeshia Williams, of Shreveport.
Written by Justin Fort