“Stage Combat Workshop@Louisiana Tech,” one of the most respected and attended workshops in theatre movement arts in the United States, is celebrating its 20th anniversary this month at its birthplace: Louisiana Tech University.
This year’s workshop, set for April 22-23, features twenty-three master teachers sharing their knowledge and stage combat expertise in single sword, broadsword, rapier and dagger, sword and shield, small sword, knife, quarterstaff, unarmed, bullwhips, and falls and rolls.  These, along with many other workshop sessions, are designed and available for beginning, intermediate and advanced students. 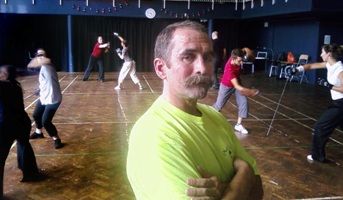 “This year’s workshop is already awesome,” said Mark Guinn, professor of lighting design, scene design, and stage combat in Louisiana Tech’s School of Performing Arts.  “The staff for the workshop has some returning veterans that were students at the first workshops and are returning as teachers, and teachers from the first couple of years who will be on hand to celebrate twenty years.”
We’re keeping true to the mission of the workshop and providing teaching slots for brand new teachers as well as bringing in theatre visionaries to share their work.”
Since joining the Louisiana Tech faculty in 1991, Guinn has been developing a stage combat program along with his other production and design responsibilities.  As a long time member of the Society of American Fight Directors, he held a couple of executive positions within the organization including that of representative for the southern region.
“As a regional rep, it was my responsibility to generate interest and provide training opportunities for members, students, and professionals,” Guinn said.  “That’s how it all began.  A small regional workshop held in Louisiana Tech’s Howard Auditorium over a weekend, twenty years ago.  I had small, but enthusiastic classes filled with students hungry to be swashbucklers.”
Since that first workshop, interest and attendance has grown exponentially.  The Stage Combat Workshop@Louisiana Tech initially provided a venue for master teachers to come and share their craft and love of the theatre and theatre movement arts.  Today, it has trained over 1,000 students from across the U.S., Canada, England, Germany, and France, and has provided a venue for over 250 teachers from the U.S., Japan, Canada, England, and Australia.
This year’s instructors includes four Fight Masters from the Society of American Fight Directors (including Guinn), a Fight Director and past president of the Society of Australian Fight Directors, the current president and Master Teacher of the British Academy of Stage and Screen Combat, six certified teachers of Stage Combat from the Society of American Fight Directors, a Guru of Sikal (a Filipino and Indonesian fight art), and a “Moniteur de Escrime” with the United States Fencing Coaches Association.
“The workshop continues to be one the best deals out there and continues to draw the best teachers and students,” Guinn said.
The Stage Combat Workshop@Louisiana Tech is hosted by the Louisiana Tech Theatre Players and takes place in the Lambright Intramural Center on the campus of Louisiana Tech University.