A team of engineering students from Louisiana Tech University set a new American fuel efficiency record on their way to a first-place finish in the Urban Concept class at the 2011 Shell Eco-marathon Americas.
Louisiana Tech’s Urban Concept vehicle, “Roadster,” won the Urban Concept title with a record run of 646.7 miles per gallon.  Tech also won one of three Shell Eco-marathon Safety Awards and the Design Award for the “Roadster” vehicle.
“It is exciting for our team,” said Dr. Heath Tims, assistant professor of mechanical engineering and one of the team’s faculty advisors.  “The students put in a lot of work to build these cars. It is great for them to be able to perform so well and break an American record.” 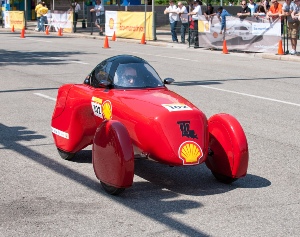 The two-day competition, held this past weekend in downtown Houston, challenged students to design, build and test fuel-efficient vehicles in an attempt to travel the farthest distance possible using the least amount of energy.  High school and university teams from throughout Canada and the United States took part in the event.
In total, Louisiana Tech took home $8,000 in prizes – more than any other U.S. university in the competition.  Tech bested traditional powerhouses such as Purdue, Penn State, UCLA, and the University of California at Berkeley.
Tims, who is also on the competition’s national steering committee, said the Louisiana Tech team has become known for our appealing designs.  “This shows how we are able to successfully meld together performance and aesthetics into something that everyone wants.”
The students, who come from many different academic degree programs, participate in the project as volunteers and do not receive any class credit.  They design, build, paint and test the cars on their own time, usually in the evenings, after class and on weekends.  They also assist with fundraising and publicity. While employing skills they learn in the classroom, these students are also developing leadership and project management skills that will serve them throughout their careers.
“Among many reasons to be proud including the American record and the multiple awards, I am proud of the unity and diversity on our team that I personally observed at the event,” said Dr. Stan Napper, dean of Louisiana Tech’s College of Engineering and Science.  “The mix of men and women, personalities, ages (freshman to seniors), and disciplines were all gratifying to see, and was unique among the other teams in the competition.”
“I am also proud of the collegial service our team provided to other teams including Louisiana high school teams from Benton and Covington and even universities from California.”
Tims said the team will use this year’s prize money to develop new and more dynamic vehicle concepts in anticipation of next year’s competition.  Team members have already begun looking for ways to improve upon this year’s success.