Dr. Donald Kaczvinsky, director of Louisiana Tech’s School of Literature and Language, has been named the new dean of the university’s College of Liberal Arts.
Kaczvinsky, who joined the Louisiana Tech faculty in 1990, will officially assume the College’s leadership role on September 1, pending approval by the University of Louisiana System’s Board of Supervisors.  He will be replacing Dr. Edward Jacobs, who is retiring after serving 14 years as dean. 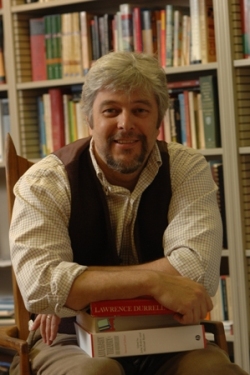 “I am greatly honored to be appointed Dean of the College of Liberal Arts,” said Kaczvinsky.  “I have worked in the college for over twenty years, first as a professor of English, then Honors Director, and more recently as Director for the School of Literature and Language. Throughout my career, I have always received tremendous support from the talented and dedicated faculty, staff, and administration.  Now I have the opportunity to give something back to the university and the community.”
“The College of Liberal Arts is an exciting place to be as we move toward Tech 2020, and my goal is to enhance the educational and research opportunities in Liberal Arts and to give our students a competitive edge in an increasingly global economy.”
Louisiana Tech President Dan Reneau says he looks forward to working with Kaczvinsky as he leads the College of liberal Arts.  “The College of Liberal Arts touches every student that attends Louisiana Tech,” said Reneau.  “Dr. Kaczvinsky in his previous positions has demonstrated his commitment to academic excellence as an administrator and teacher.”
Kaczvinsky’s scholarly accomplishments include holding the George E. Pankey Eminent Scholar Chair in English and being named a 2007 Louisiana Tech Foundation Professor.  His publications include two books, chapters in several other books, and numerous articles published in national and international journals.
Dr. Ken Rea, vice president for academic affairs at Louisiana Tech, said he has worked closely with Kaczvinsky over the past several years and feels he will effectively lead the most diversified College in the university.  “I know that Don will continue the tradition of excellent leadership that exists in the College of Liberal Arts,” said Rea.
Kaczvinsky earned a Ph.D. in English from Penn State University in 1989, a master’s degree in English from the University of Virginia in 1984, and a bachelor’s degree in English from Providence College in 1982.