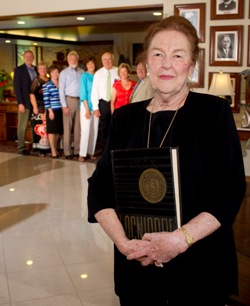 With the support of her family, Gene Hewitt Dixon graduated from Louisiana Tech, 65 years after enrolling in her first class

It took 65 years, but Gene Hewitt Dixon, of Oakdale, received her bachelor’s degree at Louisiana Tech’s summer graduation held today, along with 296 other graduates.
Dixon, 82, enrolled in Tech the first time in the fall of 1946 and the second time in the winter of 2010.
“It crossed my mind, and a year ago, my daughter and I drove up to Ruston and ate lunch with a friend who drove us around campus,” Dixon said.
That summer day was Aug. 19, 2010, the day 275 students received diplomas from Tech. Dixon said she noticed how much the university had changed but how some places still looked very familiar.
“After we got home, I said, ‘I want to go back to school,’” she said. “I had cut out of the paper something about online classes. I wrote a letter to Tech and told them I was interested in completing my education.”
Dixon took classes online in general studies, which her bachelor’s degree is in. Tech has two fully online undergraduate degrees, which are in general studies and health information management, though six online graduate degrees are available, as well as many certifications. Dixon said it was tough going from minimal computer skills to having to learn the materials in her classes as well as master the computer.
“If anyone thinks online is a breeze, it was not for me,” she said. “My computer skills were very limited. Really, the computer has been the hardest part.”
Dr. Edward Jacobs, dean of the College of Liberal Arts, served as keynote speaker of the event and encouraged graduates to embrace their new beginning as graduates.
“Our lives, the British poet T.S. Elliott said, are essentially a series of endings and beginnings,” Jacobs, who will retire as dean on Aug. 31, said. “And our lives are a constant, ceaseless process of what Elliott calls ‘exploration,’ that ultimately leads us to deeper knowledge and understanding of who we are – not just in the sense of how good we will become in our occupations or how much money we will make or how many influential friends we will cultivate – but in the sense of who we are as God’s children and what we have accomplished that leaves our world as a better place than we found it.”
Jacobs added that he hoped students would continue to explore their world and learn after graduation.
“Your graduation today is but the commencement of a new voyage into a new world,” he said. “All you have learned is that archway that you have passed through on the way to a newer world.”
Dixon said the most exciting part about taking classes was today, finishing her degree.
“I’m glad it’s behind me,” she said. “It’s been a great experience, and I can’t believe it’s really happening.
“If I miss it too bad, I’ll just sign up for something else.”