Louisiana Tech University has achieved a First Tier ranking among “National Universities,” according to U.S. News & World Report’s 2012 Best Colleges list released Tuesday.
Louisiana Tech was the only university in the state, classified as a “National University,” to be elevated to a higher tier, and is one of only two public universities in Louisiana to achieve a First Tier ranking – the other being LSU-Baton Rouge.
For the third consecutive year, Louisiana Tech was also ranked in the top ten nationally for graduating students with the least amount of debt. 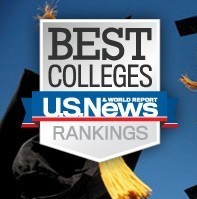 “Through perseverance and a constant focus on the future, Louisiana Tech is achieving at the highest levels and positioning itself among the top institutions in the country,” said Louisiana Tech President Dan Reneau.  “The First Tier ranking by U.S. News & World Report is proof that the nation is taking notice of the quality and performance of our university.”
“This achievement truly belongs to the administration, faculty, and staff of Louisiana Tech University.  Their passion for and commitment to the advancement of our institution is nothing short of inspiring, and they should be proud of what they’ve accomplished together.”
In addition to its First Tier “National Universities” ranking, Louisiana Tech was ranked among the nation’s Top Public Universities, along with LSU-Baton Rouge, and saw its undergraduate engineering programs and undergraduate business programs ranked as well.  According to U.S. News & World Report, there are a total of 251 institutions in the country classified as “National Universities,” of which 172 are public.
Based on categories developed by the Carnegie Foundation for the Advancement of Teaching, “National Universities” include institutions that offer a full range of undergraduate majors, as well as master’s and doctoral degrees with a strong emphasis on research.  The Carnegie Foundation defines these as Research Universities – very high research activity (RU/VH), Research Universities – high research activity (RU/H), and Doctoral/Research Universities (DRU.)
In January, the Carnegie Foundation elevated Louisiana Tech to its “Research University – high research activity” (RU/H) category, placing it among an exclusive group of approximately 100 research universities in the United States to earn this classification.
The 2012 Best Colleges survey criteria include metrics such as peer assessment, retention, faculty resources, student selectivity, financial resources, graduation rates, assessments by high school counselors, and alumni giving.
U.S. News & World Report also recognized Louisiana Tech’s graduate programs this spring in its 2012 Best Graduate School Report.  Louisiana Tech’s College of Engineering and Science ranked in the top 125 nationally of all engineering graduate schools and the College of Education ranked in the top 150 of all education graduate schools.