Louisiana Tech University will honor the memory of Dr. F. Jay Taylor on Saturday by naming the campus’ visual arts building for the former Tech president during a ceremony scheduled for 10:30 a.m.
The facility, to be known as the F. Jay Taylor Visual Arts Center, is home to Louisiana Tech’s School of Art and is located on Mayfield Street on the Tech campus, just west of A.E. Phillips Laboratory School.
The ceremony is open to the public. 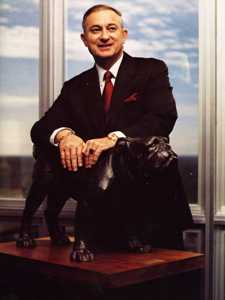 “Dr. Taylor was a great leader and a great president,” said Louisiana Tech President Dan Reneau.  “He always had a passion for the visual arts and I believe naming this building after him is a fitting tribute to his legacy.”
“I had the privilege of serving seven years under Dr. Taylor as Louisiana Tech’s vice president for academic affairs.  He was a true statesman and a very important part of Louisiana Tech’s rich history.”
Taylor served as Louisiana Tech’s president from 1962 to 1987 and was considered a dynamic leader for the institution.  During his tenure, facilities such as Wyly Tower, Joe Aillet Stadium, the Thomas Assembly Center (TAC), J.C. Love Field, and several high rise dormitories were built.  The famed Lady Techster basketball program was also established during Taylor’s term as president.
Taylor passed away on May 15 in Ruston, at the age of 87.
The F. Jay Taylor Visual Arts Center is a 40,000 sq. ft. facility with state-of-the-art equipment and laboratories.  The building also houses two galleries that exhibit the works of artists from across the nation, and a 10,000 sq. ft. auxiliary space containing sculpture, woodworking, printmaking, and ceramics labs.
Louisiana Tech’s School of Art offers undergraduate and graduate degrees in communication design, photography, and studio (ceramics, drawing, painting, printmaking, sculpture).  The School has been fully accredited by the National Association of Schools of Art and Design since 1980.
In addition to his role as an educational leader, Taylor was also an accomplished historian and author.  Upon his retirement from Louisiana Tech in 1987 and in recognition of his exemplary service to the university, Taylor was awarded the title of President Emeritus.
Taylor received his bachelor’s degree in social science from the University of California at Berkeley in 1948.  He earned a master’s degree in 1949 from Claremont Graduate University and a Ph.D. in history and government from Tulane University in 1952.