— State and local legislators, business leaders also on-campus to show support for project —
Officials from the U.S. Economic Development Administration (EDA) were on-hand at Tech Pointe in Louisiana Tech University’s Enterprise Campus for a press conference Thursday to officially award the university a $1.1 million grant to establish the LA_i6 Proof of Concept Center.
Louisiana Tech’s proposal was one of only six in the nation to be selected for the highly-competitive i6 Green Challenge grant.
The LA_i6 will partner with companies along the I-20 innovation corridor in Louisiana, Arkansas, Mississippi, and Texas to support and expedite the introduction of “green” technology innovations into the market and to optimize the environmental and economic impacts of those technologies. 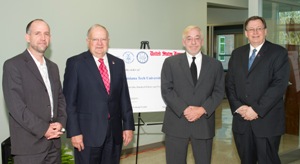 Louisiana Tech President Dan Reneau and other university administrators were joined by Rick Sebenoler from the EDA’s Austin Regional Office and several legislators and legislative representatives for the announcement.
“We are delighted to have representatives from the EDA and our local legislative and business leaders here on the Louisiana Tech campus to share in our excitement for this Proof of Concept Center,” said Reneau.  “This grant will greatly help to strengthen the production and promotion of technologies coming out of Louisiana Tech and into the marketplace.”
Recognizing the significant impacts the LA_i6 could have throughout the state of Louisiana and the potential that exists for strong university-industry collaborations, several local and state leaders offered their support for Louisiana Tech’s project and commended the university’s economic development programs.
“I have worked closely with the leadership of Louisiana Tech University to provide key infrastructure that is essential for innovation, entrepreneurship, and economic development,” said Senator Mary Landrieu.  “The award will support the university’s efforts to accelerate technology transfer from the university to commercialization partners throughout the region. These companies will ensure that innovative green technology ideas go from the manufacturing stage into homes at a faster rate.”
U.S. Congressman Rodney Alexander lauded the University for taking on such an important project.  “Receiving a grant of this nature is demonstrative of the high caliber of the university and its contributions to advancing such a vital initiative to today’s day and age.”
Support from mayors throughout north Louisiana including Ruston Mayor Dan Hollingsworth, Monroe Mayor Jamie Mayo, West Monroe Mayor Dave Norris, and Bossier City Mayor Lorenz Walker was also instrumental in Tech being selected for this funding.
Hollingsworth has partnered with the university on a number of occasions to advance the university’s economic development efforts.  “The involvement of Louisiana Tech in the development of Ruston 21, our community’s comprehensive master plan, has been very strong,” he said.
In addition, several members of the state’s business and economic development communities are providing support for the Center including CenturyLink (Monroe), Cleco (Pineville), Murphy Oil (El Dorado, Ark.), Solar Energy Supply (West Monroe), M.L. Smith (Ruston), Hanson Pipe and Precast (Irving, Texas), and the North Louisiana Economic Partnership.
“This award from EDA and their partner federal agencies is recognition that the economic development mission of Louisiana Tech is innovative and impactful, and it holds great promise for the future of our region and for the nation,” said Dr. Dave Norris, director of Louisiana Tech’s Enterprise Center.  “The new LA_i6 will generate tremendous opportunities for sustainable, high quality economic growth right here in north Louisiana.”
First announced at the White House launch of “Startup America” in January, the i6 Green Challenge was a multi-agency, national competition focused on accelerating high-growth entrepreneurship in the United States. The U.S. Department of Commerce was the lead agency with other participating agencies including the Departments of Energy, Defense, Agriculture, the Environmental Protection Agency, and the National Science Foundation.