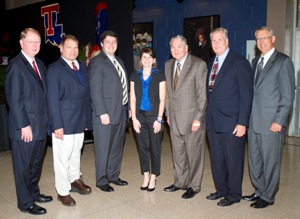 “We recognize the value our graduates give back to society,” Reneau said. “The man being honored today has contributed so much to his community and to Louisiana Tech.”
Hudson discussed how many members of Tech’s family have influenced him over the years – from his wife, who helped convince him to attend Tech, to former football coach Joe Aillet to Dr. Virgil Orr to Reneau to former basketball coach Scotty Robertson. Hudson gave the crowd words of wisdom that Robertson had spoken to him years previously.
“I would challenge everyone to look for the best in people,” he said. “Be optimistic about what you are doing. Bring your family together and love them.”
Jeff Parker, president of the Alumni Association Board, stated that a nomination committee chose Howell for her dedication to her community and to Tech.
“Her credibility and what she’s done in a short amount of time is impressive,” he said. “She displays a lot of excitement for teaching.”
Howell, a Ruston High School teacher, said her days at Tech were “truly excellent” and equipped her to enter the real world.
“My Tech professors equipped me to be autonomous and to be a lifelong learner,” Howell said. “I’m proud to be a Bulldog.”
Corre Stegall, vice president for university advancement, said she was inspired and grateful for what these alumni have accomplished.
“It’s an extraordinary group of people who have done amazing things in their lives,” she said. “They represent more than 90,000 Tech graduates.”
The Distinguished Alumni include the following:
* College of Applied and Natural Sciences: Bill Jones, Class of 1969
* College of Business: Paul Bullock, Class of 1975
* College of Education: Randy Moffett, Class of 1969
* College of Engineering and Science:  Charles Gandy, Class of 1955
* College of Liberal Arts:  Gary Kennedy, Class of 1973