When Holland, Pa., graduate Ann Marie Dickson walked across the stage receive her diploma at Louisiana Tech’s graduation ceremony Saturday, she was not the first in her family – or the second, or the third. 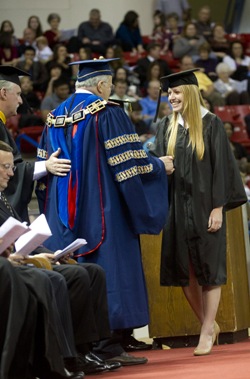 “I will be a third generation Tech graduate,” Dickson, a general studies graduate, said. “My grandfather and dad went to Tech. Also, my aunt and two uncles. I will be the sixth brick.”
Dickson transferred to Tech in 2010 and said that even though she hasn’t been at Tech long, she still feels home.
“I have been looking forward to this day from the first day I set foot on Tech’s campus,” she said. “I have only been attending Tech for a year and a half because of transferring, but I feel as much a part of the Tech family as if I had started as a freshman.”
George Baldwin, Tech alumnus and petroleum engineer and principal of Baldwin Madden Energy, LLC in Shreveport, served as keynote speaker for the 320 graduates and discussed how success is a choice for the graduates. Dickson said, for her, she feels that success is based on whether or not one’s goals were achieved.
“If your goal was to be president of the United States and you became president, you are successful,” she said. “If your goal was to be the best elementary school teacher you could be, and you are, you are successful. Neither is more successful than the other. I intended to graduate from Louisiana Tech University in 2011, and I am doing just that. I know there are people who are very proud of me, but most importantly I am proud of myself.”
Baldwin reminded students that many individuals had supported the graduates on their path to this day and said that the real race had just begun.
“I know for each of you, something wonderful is possible,” Baldwin said. “The life and success you want is out there.”
Baldwin added that real success was not born into or gained through luck but by hard work and finding out what matters.
“You must choose what matters to you,” he said. “To succeed, you must figure what you want, go to work, and give it your all. May you figure out what matters, and may you succeed.”
Haley Green received her bachelor’s in speech language pathology from Tech in 2009 and came back to obtain her master’s degree in the same subject area. She said she hoped she made an impact on the lives of those she worked with.
“What I consider successful in my profession is not about making money, but making an impact in my patients and their families’ lives,” Green said. “There is nothing better than seeing a patient make progress in therapy and thanking you in the end.”
She added that grad school was one of the toughest challenges she had ever faced, but she was glad to have finished because she grew and had some good times, too.
“There were some days I just wanted to quit because I didn’t think I could take the stress and school work anymore, but with God, my family and friends, I was able to push on through,” Green said. “Graduating with my master’s is a very big achievement to me because I was able to make it through the program and I am the first one in my family to get their master’s. I am very proud of myself and so excited to finally see the day of graduation. Seeing my diploma will probably be the most monumental thing to me because I will finally feel done with school and will know that I earned it, and no one can take that degree from me.”
Written by Judith Roberts – jroberts@latech.edu