The Division of University Advancement at Louisiana Tech has released Giving Back, Moving Forward, the 2011 edition of its Tech Report, which highlights the university’s academic and research accomplishments during the past year as well as the contributions it has made to strengthening the region and the State.
The Tech Report is published annually by the Louisiana Tech University Foundation to share the university’s academic, research and athletic achievements, and to its vision for the future of the institution. 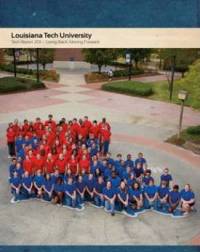 “Alumni and friends of the University are justifiably proud of the amazing success Louisiana Tech is experiencing, and we all know that a team effort is the key,” said Corre Stegall, vice president for University Advancement for Louisiana Tech.  “In these most difficult economic times for higher education, private support in many forms is not only sustaining Tech, but this support is also providing a key to excellence.  This year’s Tech Report highlights a student body that will undoubtedly be the next generation of committed alumni; it’s inspiring!”
Giving Back, Moving Forward presents an overview of the university and its achievements, the contributions of its people, its performance as an institution of higher learning, and its service to the state.  It offers a comprehensive look at another highly successful and productive, yet challenging year for Louisiana Tech.
“Our students, faculty and staff continue to perform at the highest levels and are making positive impacts throughout our region and our state,” said Louisiana Tech University President Dan Reneau.  “All that we’ve been able to accomplish this past year is a direct result of their commitment and contributions.  I am proud of what we have achieved together and even more excited about where we are going.”
Despite continued budget reductions and the growing uncertainty surrounding the future of the state’s higher education infrastructure, Giving Back, Moving Forward shows how Louisiana Tech continued to focus on institutional performance, earning a Tier One “National University” ranking in US News & World Report’s 2012 Best Colleges, a “Research University – high research activity” classification from the Carnegie Foundation, and the Louisiana Tech University Foundation having its most successful fundraising year in the school’s history.
Louisiana Tech also maintains the University of Louisiana System’s highest graduation rate, highest retention rate, highest average freshman ACT score, and the state’s fastest time-to-degree completion for first-time baccalaureates and highest student-athlete graduation rate among Louisiana public institutions with football programs.
In addition to institutional rankings and achievements, Giving Back, Moving Forward highlights Louisiana Tech’s contributions to strengthening the communities of north Louisiana through community service and improvement projects, educational outreach activities, and volunteerism.
Louisiana Tech was named to the President’s Higher Education Community Service Honor Roll and recognized by the Corporation for National and Community Service for its leadership among institutions of higher education in supporting volunteerism, service-learning and civic engagement.
Campus and student service enhancements, research and discovery, and student-led innovation productivity round out Giving Back, Moving Forward, providing a clear and comprehensive picture of Louisiana Tech’s accomplishments in 2011.
Giving Back, Moving Forward is made possible through the support of the Louisiana Tech University Foundation and can be viewed or downloaded online at Tech Report 2011.