It might have been double the pressure, but now it’s double well-done for twin sisters Maegan and Mallory Watson, who graduated together Saturday—both with 4.0 GPAs.
The sisters, 21, from Luling, said they took all their courses together to have a built-in study partner, and it seems to have paid off.  Both Watsons graduated
with bachelors’ degrees in animal science, pre-veterinary medicine  concentration.
And while their coursework at Tech is complete, their studies are far from over.

“We’ve both been accepted to veterinary school at LSU,” Maegan Watson said.  They plan to start in the fall.
Louisiana Tech graduated 343 students in its winter graduation exercises Saturday. Dr. Jim Purcell, the state commissioner of higher education, offered the
commencement address.
Purcell, who has spent more than 25 years working in education and economic development in five states, emphasized the importance education and family play in one’s journey toward achieving the American Dream.
“This day will be a significant event in your life story,” he told the graduates. “The American Dream, the American journey is actually of story of many generations.  Your success today was dreamed about by your parents, by their parents and probably beyond.”
Purcell shared some of his own family’s story and encouraged the students to remember to thank their parents and grandparents for supporting them in this first step toward success.
Graduate Erin Simmons, 21, of Minden, didn’t have to wait to do that.  Her father, Jonathan Simmons, 42, was seated right next to her.
Both Simmonses received their associates’ degrees in nursing Saturday.
Erin began her program at Tech in the fall of 2008, a quarter before her father. 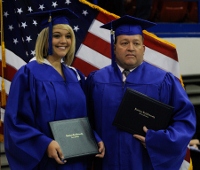 “As a teenage daughter, I often teased her I was going to follow her to college, and I did,” Jonathan Simmons said.
Jonathan joined the Army Reserves in the spring of 2008 when he decided he wanted to return to college as a way to help ease the financial burden he knew it would place on his family, but his family eased the personal stress, he said.
“I knew I had enough of a support system to go back,” he said.
Jonathan Simmons said his entire family and his co-workers at the Minden towing and recovery business he manages all pitched in to ease his workload.
Erin Simmons said she was initially a little apprehensive about having Dad around for her entire college experience.
“It’s one of those things I was nervous about,” she said she wondered, “Am I still going to get the college experience?  But he really just amplified the experience.”
Erin Simmons said her father starting hosting the study groups at his house compete with pizza, and he became like the father to the entire group of young nursing students.
“I just adopted a bunch more children, nieces and nephews,” he said.
The only downside, Erin said, was those rare occasions when she wanted to just sleep in and take a day off from class as many college students are wont to do.
“I couldn’t skip class because he would call my phone and call and call and call,” she said.  “I never got to take a day off because Dad was in every class.”
Still, she said she wouldn’t trade the experience.
“We’ve always been close and going to school together made us closer,” Erin Simmons said.  “Working together is going to bring us even closer.”
Both Simmonses have accepted nursing positions at Minden Medical Center.
Written by Elizabeth Barfoot Christian – ebchrist@latech.edu