A team of students from Louisiana Tech University’s College of Engineering and Science is preparing to defend its U.S. Eco-marathon fuel efficiency record at the Sixth Annual Shell Eco-marathon Americas, scheduled for March 29 through April 1 in Houston, Texas.
The event challenges students to design, build and compete with their high-mileage vehicles in competitions held annually in Europe, the Americas and Asia.  The Louisiana Tech students will be joined by over 1,000 other high school and university students from around the country to navigate their fuel-efficient vehicles through the streets of downtown Houston. 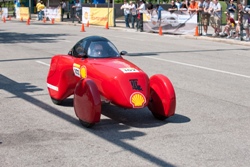 However, the Tech students have a bigger goal.  They hope to beat the U.S. record of 646.7 miles per gallon they set during last year’s competition with their Urban Concept vehicle, “Roadster.”  The team also won first place last year for overall design and safety.  The team will be competing with area schools including University of Houston and Rice University as well as national rivals UCLA, Purdue and Penn State.
Dr. Heath Tims, assistant professor of mechanical engineering and one of the faculty advisers for the team, also serves on the event’s national steering committee.
“The team is excited to defend their title as well as introduce two new vehicles to the competition this year,” Tims says.  “In addition to bringing a new prototype vehicle to the competition, the Louisiana Tech team is also competing in a new diesel engine category.”
The Louisiana Tech students, who come from many different academic degree programs, voluntarily participate in the project and do not get class credit.  They design, build, paint and test the cars on their own time, usually in the evenings, after class and on weekends.  They also assist with fundraising and publicity.  While employing skills they learn in the classroom, these students are also developing leadership and project management skills that will serve them throughout their careers.
This year’s vehicles will be raced on a track built around Houston’s Discovery Green.  Cash prizes are awarded for eco design, safety, technical innovation and best team spirit.
Written by Catherine Fraser – cfraser@latech.edu