The last time someone other than Dr. Kenneth Rea occupied the vice president for academic affairs’ office at Louisiana Tech, a gallon of gas cost less than a dollar, the Fox Network was a television “start-up,” and Microsoft Windows 2.0 was the latest and greatest in PC operating systems.
But after 44 years of loyal and distinguished service to his alma mater, both as a history professor and an academic leader, Rea has decided it’s time to call it a career and will officially retire on August 31. 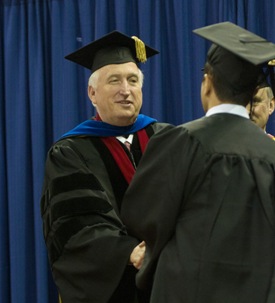 “It just doesn’t seem like it has been 25 years,” said Rea, who became vice president in 1987.  “I think that comes from the pleasure of having worked with such outstanding faculty and staff.  I’ve also been fortunate to have had a support staff who have been with me almost my entire tenure as vice president.”
Rea’s relationship with Louisiana Tech began in the early 1960s as an undergraduate student pursuing a degree in history.  “I had a very positive experience as an undergraduate student and had great teachers who helped me to develop and prepare for future challenges such as graduate school,” Rea recalls.  “I believe that caring culture still exists at Tech today.”
Following his graduation from Louisiana Tech in 1966, Rea continued pursuing his love of history, earning a master’s degree in 1968 and a Ph.D. in Chinese history in 1970 from the University of Colorado at Boulder.
His graduate studies might have taken him to Colorado, but his heart brought him back to Louisiana Tech.  Rea soon returned to Ruston to take a position as a history professor in Louisiana Tech’s College of Arts and Sciences (now known as the College of Liberal Arts.)
Over the next two decades, Rea would assume a number of administrative positions including graduate director for the Department of History and the College of Arts and Sciences.  He also served as the College’s associate dean and director of research.
In 1987, when Dr. Daniel D. Reneau vacated the vice president for academic affairs office to become Louisiana Tech’s 13th president, Rea was an easy choice to replace him.
“Throughout his career, Dr. Rea has exemplified personal and professional commitment, loyal service, and strength of leadership for the faculty of Louisiana Tech,” said Reneau.  “I have been privileged to have had him by my side as academic vice president throughout my entire tenure as president and believe much of our academic and programmatic progress has come as a result of his tireless efforts and dedication.”
Dr. Rea has played an important part in Louisiana Tech’s transformation over the past 25 years.  The scope and impact of his many contributions are immeasurable.”
Throughout his tenure as vice president, Rea says that Tech has undergone a “quiet revolution,” which has come from strong leadership and smart, yet bold decision-making.  One such bold (and smart) decision was going selective admissions in 1991.
“That was very important in Tech being where it is today,” recalls Rea.  “It was something Dr. Reneau had begun formulating while he was vice president and was able to implement upon becoming President.  Initially, our enrollment dropped about three times more than our model had predicted, but after a couple of years, enrollment rebounded with a much stronger and better prepared student.”
Rea also believes that Louisiana Tech’s transition from a teaching institution to a doctoral research university and the development of an interdisciplinary academic environment has been vital to the university’s long-term growth.  He says the strength of the faculty and their commitment to students at all levels is another cornerstone of Louisiana Tech’s success.
“Our faculty work closely with students at all levels, from freshman through graduate, and that is what sets Tech apart,” says Rea.  “At most universities, you might not see an actual professor in your classroom until your junior year.  But at Tech, engagement with all students is something that is expected of the faculty and has been embraced by them.”
The emphasis on quality teaching has been one of the most important aspects of Louisiana Tech over the years.  Our core values haven’t changed since I’ve been here and I believe it is part of what makes Louisiana Tech such a unique university.”
Rea certainly has much to be proud of during his 25 years as vice president of academic affairs.
“Helping to lead the University toward its designation as an SREB doctoral institution is one of the things of which I am most proud.  Louisiana Tech has worked hard to achieve this designation, which is a credit to the faculty and their commitment to the advancement of the institution.”
I’m also very proud of the inventory of degree programs we have, especially those that are interdisciplinary and those at the doctoral level.  Both have contributed to improving the quality of our faculty, who in turn have done a great job of seeing the needs that exist and have put processes in place to design unique and innovative programs to meet those needs.”
The development of Louisiana Tech’s honors and study abroad programs are also a source of pride for Rea.  Both have grown in size and quality, as well as the number of educational opportunities they offer.
“On behalf of the entire Louisiana Tech family and the thousands of students and faculty he has impacted throughout his career, I want to sincerely thank Dr. Rea for being such a valued part of our university’s success and I wish him nothing but the best during his well-deserved retirement,” said Reneau.  “He will certainly be missed.”
“I’d like to thank Dr. Reneau for selecting me to be his vice president for academic affairs so long ago,” says Rea.  “It has been an honor to work for him and with him for the past 25 years.”
After retirement, Rea says he’d like to finish a few research projects that he’s been working on and also wants to continue to pursue his passion for photography.  He’s also looking forward to spending a lot more time with his new baby granddaughter.
Rea would also like to do some traveling with his wife Becky, who retired about three years ago.  Although he doesn’t have any specific travel plans yet, he’ll likely cross one particular destination off his list.
“After 25 years of almost monthly trips, I’m really looking forward to traveling to places other than Baton Rouge,” Rea said with a smile.