Seven from Tech to compete for Miss Louisiana crown

Women across the state will gather in Monroe the week of June 18-23 to compete in the Miss Louisiana pageant, and Louisiana Tech will have seven representatives vying for the crown.
Angela Cassels, of Calhoun; Abby Chowns, of Monroe; Mallory Cox, of Ruston; Christiana Hayward, of Monroe; Meagan Lee, of Rayville; Julianne Tippen, of West Monroe; and Lauren Vizza, of Shreveport, are the Tech women seeking to represent the state at the national level. 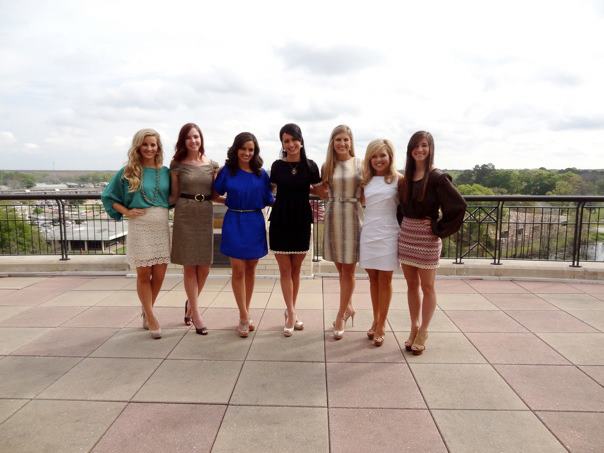 “I am ready for the whole week to begin,” said Chowns, a junior biological sciences major who holds the title of Miss Louisiana Stockshow. “The pageant is held in my hometown of Monroe, so it makes me equally nervous as I am eager to make my friends and family proud.”
Tippen, who is Miss Acadiana, said she is ready to perform what she has spent so much time practicing.
“Besides the obvious jitters about the entire pageant itself, I believe I am most nervous about the week being over with before I know it,” she said. “Everything I have done for the past seven or eight months has all had to do with preparing for the pageant and events surrounding it. I just want to be able to soak up every single memory and enjoy every moment.”
Vizza, Cox, Hayward, Cassels and Lee are veterans to the Miss Louisiana Pageant, and Vizza, who holds the title of Miss Louisiana Tech, said she has learned from her experience to show the judges her personality.
“I learned that in absolutely everything I do during the week and especially in competition I have to stay true to myself,” said Vizza, who made the Top 5 in Miss Louisiana the past two years. “It’s so important that in everything you wear and do that you reflect your personality — and also just to remind myself to have fun.”