The original entrance to the University has been restored with original bricks from Hale Hall. 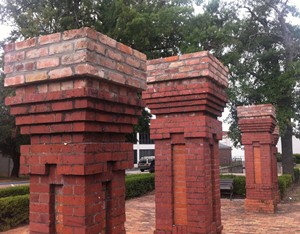 These newly-restored pillars have marked the original entrance to the Louisiana Tech campus for over 100 years.

The four brick pillars along Railroad Avenue near the Business Building are more than a century old and mark the original entrance to Louisiana Tech. Crumbling due to time and the elements, the 8- and 10-foot pillars were recently given an update, then capped and sealed to hopefully keep water out and extend life.
“The original bricks were made essentially on site and non-standard in size,” said Sam Wallace, director of facility and support services at Louisiana Tech. “Instead of looking around for old bricks that might match and have no connection to Tech, we used bricks that were salvaged from Hale Hall when it was demolished.
“The color and the size of the bricks from Hale Hall are different than those on the columns, but they have a connection to the campus.”
The original bricks of this Tech landmark outdate every building on campus, including the Ropp Center, which served as the president’s home when built in 1911.  The Ropp was fully renovated in 2003.
Written by Teddy Allen – teddy@latech.edu