Mallory Cox, the runner up for the 2012 Miss Louisiana Tech contest, received the crown Thursday, as Lauren Vizza, the previous titleholder, is now reigning as Miss Louisiana. 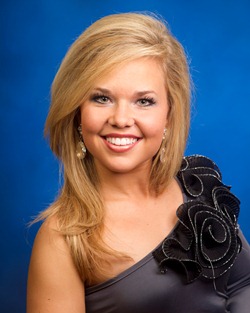 Cox, who received runner up both years she has competed for Miss Tech, said as she is planning to graduate May 2013, she is eager to have this opportunity to attain the title.
“I’m very honored and thrilled to represent my university as well as my community,” Cox said. “I’ve grown up in Ruston my life, so it means a lot to me.”
Rules for the Miss Tech pageant state that participants must be enrolled in the university while they serve and, should she be selected as Miss Louisiana, she must relinquish the crown to the runner up. In 2003, Melissa Clark handed her Miss Tech crown to Jennifer Porter when Clark became Miss Louisiana.
“This is a well-respected pageant,” said Dr. Jim King, vice president for student affairs. “It has a longstanding tradition, and it does produce champions.”
As for Cox, who has competed in the Miss Louisiana pageant twice, she said she is looking forward to serving Tech.
“For the freshmen convocation, usually Miss Tech performs and speaks,” she said. “I’ll perform there and I’ll participate in Happening XXXI next week.  Anything that they need me to do, whether it’s doing the coin toss for football games or any homecoming event anything like that, they can ask me to do. I can fulfill any duties as Miss Tech.
“This would be the only time I can be Miss Tech. I am very excited.”
Written by Judith Roberts – jroberts@latech.edu