Louisiana Tech University alumni and supporters came out in force Thursday evening to find out what’s happening with the university and higher education in the state as Happening XXXI was held at the Monroe Civic Center.
The annual event, hosted by the Louisiana Tech Alumni Association and presented by Argent Financial Group, brought in a crowd of over 1,100 to celebrate the upcoming Bulldogs football season and the academic achievements of the University.  Louisiana Tech President Dan Reneau, Athletics Director Bruce Van De Velde and Head Football Coach Sonny Dykes served as speakers for the event, with Reneau focusing on the state of higher education in Louisiana and the role Louisiana Tech currently plays and what that means for the future.
“Happening XXXI was a great success; the Tech Family was energized and gained new pride as Tech continues to make giant strides despite great challenges,” Vice President for University Advancement Corre Stegall said. 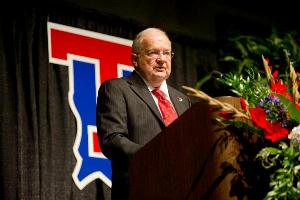 President Dan Reneau talks about the Future of Louisiana Tech

Reneau spoke of those challenges as he began his speech.
“Higher education in this state, in my opinion, is at a crossroads,” Reneau said. “It can’t stay like it is.  We’re in a financial crisis and we have a vacuum of leadership. LSU and LSU-Shreveport have interim chancellors. Randy Moffett is stepping down (as president) from the University of Louisiana System. Medical schools and charity hospitals are at a crossroads. Schools are laying off workers. I’m not blaming anyone. It’s just a shortage of money.
“Should it continue, we’re going to see some big changes coming. It will not be the same. Roles are going to be redefined.”
Reneau commended Board of Regents Chair Robert Levy and University of Louisiana Systems Board of Supervisors Chair Wayne Parker for their work in a period of tough times for higher education in Louisiana and also said he is proud of the role Louisiana Tech plays.
“I think there is a shining light in at least one university in this state — Louisiana Tech,” Reneau said. “I like to say we’re finding success in the face of disaster.”
Reneau touted $125 million worth of campus construction since 2008, with $55 million of that being self-generated. He also lauded an increase in ACT scores of incoming Tech freshman from 23.3 percent in 2008 to the current average of 23.8.
“That’s a much bigger increase than it might sound like,” Reneau said. “And we’ll soon reach an average score of 24.0.  We also have more TOPS students.  In 2008, 79 percent of our freshmen were TOPS (a scholarship program funded by the state of Louisiana) students.  Now that number is at 85 percent.”
And Reneau praised the fact that Louisiana Tech has been elevated to a Tier 1 ranking among national universities by U.S. News and World Report and was recently touted by Newsweek and The Daily Beast as one of the 25 Most Affordable Schools for both in-state and out-of-state students.
Reneau went on to commend Tech professors and graduate students for their participation in the search to discover the Higgs boson particle research project at the CERN Large Hadron Collider in Geneva, Switzerland. 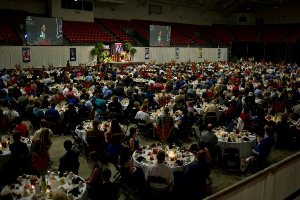 Over 1,100 members of the Tech Family gather for Happening XXXI

“One of our professors, Lee Sawyer, was an eyewitness to some of the experiments and described it as like seeing Einstein write ‘E=mc2’,” Reneau said.
All of those facts, Reneau said, prove that Tech is not only surviving but also thriving in these tough economic times.
“It’s all about trimming and focusing roles, scopes and missions,” Reneau said. “It’s not asking what could we have done (in better financial times) but instead what we can do with what we have to work with.
“We’ve been bloodied, but Louisiana Tech hasn’t lost that can-do attitude. Our workers have taken hits, but they’re can-do people and Tech is a can-do university.”
Area legislators and elected officials were in attendance for the evening, which included a dinner and program including athletic videos and a video segment narrated by Tech product Terry Bradshaw spotlighting Tech’s research and economic efforts helping to bolster the Ruston community.  That video will air both nationally and regionally on a number of television networks in upcoming months.
Following a video on Tech athletics, Van De Velde briefly spoke to those in attendance.
“Tech athletes have a strong and powerful tradition of outstanding individual and team achievements,” Van De Velde said. “That showed this past week when three of our former athletes (thrower Jason Morgan, long jumper Chelsea Hayes and triple jumper Ayanna Alexander) competed in the Olympic Games. Last weekend we also had our third former football player (William Roaf) inducted into the NFL Hall of Fame.”
Van De Velde also spoke of increased graduation rates, academic scores and community service projects from Tech athletes and of the excitement surrounding Tech athletics as it participates in its last year in the Western Athletic Conference before joining Conference USA next summer.
“That’s exciting because Conference USA will position us with other schools that also have a strong academic base,” Van De Velde said. “But it will bring big challenges too, because we’re right near the bottom of Conference USA budget-wise. Now we have to step it up. The level of success we’ll see will rely largely on support we’ll get from outside the university. But we need help from everyone. Remember, it’s the size of the contribution. It’s strength in numbers that matters.”
After a video reviewing last year’s march to the Poinsettia Bowl by the Bulldogs football team, Dykes teamed with Allen for a talk-show format describing what to expect this season as Tech contends for a WAC title.
“When you play on a big stage like we did in the Poinsettia Bowl, you worry about how the players will handle it,” Dykes said. “And the players did a great job. But it wasn’t quite enough against a great team like TCU (the Horned Frogs won 31-24). It was a learning experience, and it’s made us hungrier to make it back to a bowl this season, and win one this time.
“We have a lot of players coming back — a good nucleus to work with and we had an excellent spring and stayed healthy. The guys are working incredibly hard in preseason camp.”
Dykes, heading into his third season at Tech’s head coach, said he’s also pleased that he’s seen no turnover in his coaching staff since taking over the program.
“The coaches love Ruston and the community and realize Tech is a special place. It’s hard keeping assistant coaches when you’ve been success, but I think they see great things on the horizon.”
Tech Director of Alumni Relations Ryan Richard said he was pleased with the turnout for Happening XXXI and said it kicks off another big year for the university.
“Having so many members of the Tech family come together for this year’s Happening was exciting and I am sure their enthusiasm will continue as football season approaches,” Richard said. “Our alumni and fan’s loyalty to Tech is what keeps our University moving forward.”
Written by T. Scott Boatright – boat@latech.edu