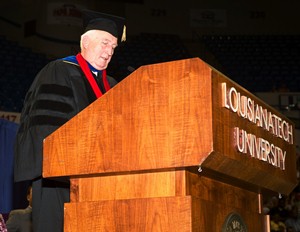 Dr. Kenneth Rea, vice president for academic affairs and Garnie W. McGinty chair of history, served as graduation speaker and encouraged students to become a supporter and advocate for education at all levels.
“There is not a person in this building today who has not benefited in some way from education,” Rea said. “America’s technology advantage is a direct result of the partnership between higher education and the government. The higher education system that is the envy of the world is a result of that investment. That system is being threatened at home from massive budget cuts and from abroad by emerging nations.”
Rea added that, as is written carved into the north wall on the second floor of the Library of Congress, “The foundation of every state is the education of its youth.”
“At the time other nations are investing in education, just the opposite is occurring in the United States at every level,” he said. “It is our responsibility to ensure that obligation is met for the sake of your children and the nation.”
One of the reasons Ilyas Gunesebakan, a native of Turkey who graduated with his bachelor’s in mechanical engineering, said he attended Tech was because of the university’s reputation.
“It was a good mechanical engineering school,” Gunesebakan said. “It’s like a family here. All the people are connected to each other somehow.”
Timmothy Harper, who graduated with his bachelor’s in political science, said he hopes that his future children will attend Louisiana Tech and receive a valued education.
“My kids will probably go here one day,” said Harper, from Jacksonsville, Fla. “Tech taught me a lot in perfecting who I am as a person, how I grow as a person and what I believe.”