— Reneau’s presidency marked by unprecedented institutional growth and achievement —
After a 50 year relationship with Louisiana Tech University – both as a student and an educator – and 26 years as Louisiana Tech’s president, Dr. Daniel D. Reneau announced Tuesday that he will retire from the university, effective June 30, 2013.
The announcement was made during Louisiana Tech’s fall faculty and staff meeting in Howard Auditorium.  Joined by family, friends and colleagues, Reneau reflected on how far Louisiana Tech has come during his tenure as president, recapped the past year’s achievements, and talked about what the future holds for him and the university. 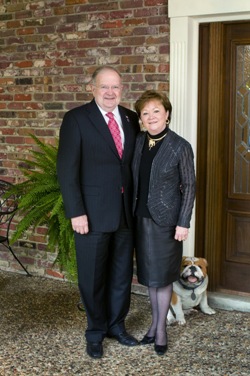