Director of Enterprise Center invited to participate in D.C. panels

— Dr. Dave Norris to discuss higher education’s role in innovation, entrepreneurship —
Dr. Dave Norris, executive director of the Enterprise Center at Louisiana Tech University, has been invited by the U.S. Department of Commerce to participate in two panel discussions in Washington D.C. with senior administration officials and higher education leaders from around the country.
Norris received the invitations to discuss the mission and progress of Louisiana Tech’s LA_i6 Proof of Concept Center, which supports and expedites the introduction of new “green” technology innovations into markets throughout the region and the nation.  Tech received a $1.1 million grant award from the Economic Development Administration to establish LA_i6 in September 2011 as a winner of the Innovation 6 National Competition. 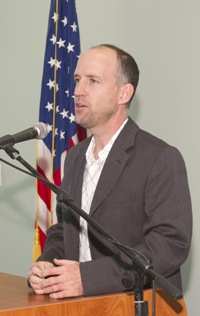 “We are taking innovations from the University and from our regional business partners and leading entrepreneurs and bringing those to market to create new jobs, new business activity, and build a 21st century innovation economy in north Louisiana,” said Norris.
LA_i6 partners with companies along the I-20 innovation corridor and works to amplify and promote the social, environmental, and economic impacts of green technologies produced through the center and its partners.  Louisiana Tech’s i6 proposal was one of only six in the nation to be selected for the highly-competitive i6 Green Challenge grant.
In addition to its work with public and private sector organizations, LA_i6 will collaborate with researchers and organizations at Enterprise Campus, Louisiana Tech’s research park.  Enterprise Campus was established to provide an environment that supports the engagement of industry, government and community partners in the research, development, and educational activities of Louisiana Tech.
“The LA_i6 grant is enabling us to strengthen our efforts with regional private and public sector partners to accelerate the commercialization of innovative technologies,” said Dr. Les Guice, executive vice president and vice president for research and development at Louisiana Tech.  “It is also providing Louisiana Tech with tremendous national exposure as a model program for innovation and entrepreneurship in rural communities.  Dr. Norris has done a superb job in building this program and connecting it with many regional and national partners.”
The U.S. Department of Commerce panel discussions will coincide with “The Innovative and Entrepreneurial University: Higher Education, Innovation and Entrepreneurship in Focus” – a higher education conference hosted in part by the White House centering on the role America’s colleges and universities are playing in innovation and entrepreneurship.  Norris’ first panel will take place during a session on October 1 at the U.S. Department of Commerce and The White House.
The following day, Norris will participate in a second panel as part of the i6 Challenge Winners’ Conference at the U.S. Department of Commerce’s Herbert C. Hoover Building.  The conference will be highlighted by a semi-structured discussion about the role of the Office of Innovation and Entrepreneurship and the i6 Proof of Concept Centers to support proof of concept, innovation and entrepreneurship.  It will conclude with an i6 showcase and poster session at the U.S. Capitol.
“The invitation to Louisiana Tech to participate in these conversations in D.C. on a topic that is such a significant priority for this administration and for the country is a testament to the leadership the university has shown in developing infrastructure on campus and partnerships in the region aimed at building the innovation enterprise in north Louisiana,” Norris said.
Both days’ events are hosted by the Office of Innovation and Entrepreneurship at the Economic Development Administration.