Dan Erickson, Louisiana Tech’s director of international students and scholar services, recently returned from a 13-day recruiting trip to India in hopes of increasing the international student population.
Erickson, along with 11 other universities, received a grant from ELS, an organization that seeks to promote international studies, to visit universities and high schools in five Indian cities.
“We met over 700 students at the (graduate school) fairs and almost that many at the high schools and colleges,” Erickson said. “I have no doubt we’ll receive more than 50 applications at the graduate and undergraduate level.”
Erickson said part of his assurance is because of the one-on-one conversations he was able to have with the students.
“Person after person came asking deep questions, and parents were asking deep questions about decisions they have to make in the future,” he said. “I felt we made a lot of connections.” 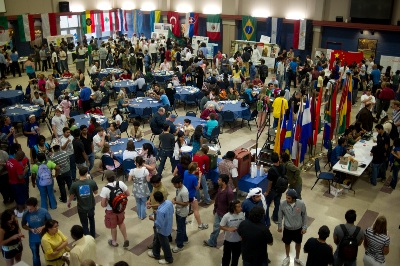 Also, Erickson said Tech is well known in India, as one of the top two Hindu newspapers in India recently wrote a story about two Tech Ph.D. graduates from India who were in Switzerland assisting in the discovery of the Higgs Boson particle.
“We’re a great choice,” Erickson said. “We are a Tier 1 national university.”
Deepanjan Mukhopadyay, a photography major from India, said he was accepted into eight programs in the United States, but economics drew him to Tech.
“I could afford Tech,” Mukhopadyay said. “There are not really many colleges with photography. I searched the Internet and took many things into consideration and then narrowed it down to the ones I thought were the best.”
Mukhopadyay chose to study photography in America because photography in India is considered more of a technical art than fine art. He said he has been pleased with his choice in coming to Tech.
“I like the people here,” he said. “I feel more at home here than back home.”