Tech to honor legendary coach with renaming of gymnasium, court

Longtime men’s basketball coach Scotty Robertson left an indelible impact on Louisiana Tech University, so it’s only fitting that the favor is returned.
And Tech will do just that at 11 a.m. Saturday as the university officially names the Robert “Scotty” Robertson Memorial Gym in a dedication ceremony to be held on the front steps of the gym next to the Tech Natatorium.
All Tech basketball fans and the general public are invited to join in on the dedication.
The newly renovated gym floor will be available for viewing following the dedication.
The renovation project was designed to permanently honor Robertson — an eight-time Hall of Famer — and will serve as an alternate practice facility for the Bulldog and Lady Techsters basketball teams.
Robertson, who passed away in August of last year, coached the Bulldogs from 1964 to 1974 and recorded a 161-86 mark while leading Louisiana Tech to its first ever NCAA Tournament appearance. He also spent time in the NBA, serving as the head coach for three organizations and assistant coach for six more.
He was also honored as a Tech “Alumnus of the Year” for the university school of education.
During his tenure at Tech, Robertson led the Bulldogs to three Gulf States Conference championships, achieved the No. 1 national ranking in the college division and played in two college-division (later known as Division II) NCAA postseason tournaments. 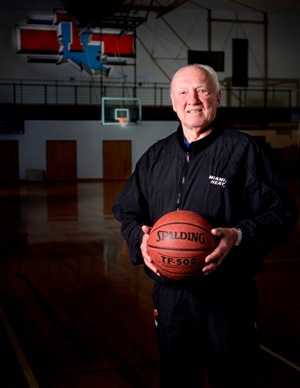 Robertson was the first coach of the expansion New Orleans Jazz in 1974-75 and was head coach of the Chicago Bulls for a brief time in 1978-79. He then became coach of the Detroit Pistons for three seasons (1980-82), setting in place some of the personnel for the team’s NBA championship clubs later in the decade.
He also had assistant coaching roles for the Indiana Pacers, San Antonio Spurs, Phoenix Suns and Miami Heat. He was with the Suns for the 1992-93 season when they reached the NBA Finals before losing to the Michael Jordan-led Bulls.
Sports Floor Inc. of Memphis, Tenn., worked on the renovation of the facility and the Tech kinesiology department and A.E. Phillips Laboratory School will also use the gym.
A leadership team consisting of honorary chairman Doug McGuire, co-chairmen Jerry Hudson and Johnny Maxwell, and members John Caruthers, Don Hathaway, Guthrie Jarrell, John Long and Leo Sanford, began the fundraising campaign last January.  Contributions from former players, coaches, friends and colleagues of Robertson, as well as other Louisiana Tech supporters, made the renovation possible.
Along with the new floor, new backboards, rims and padding have been installed as well as repair to the bleachers.  New wench systems for the goals will also be installed in the near future.
Written by T. Scott Boatright – boat@latech.edu