The University of Louisiana System Board of Supervisors unanimously approved the selection of Dr. Leslie K. Guice as the 14th president of Louisiana Tech University during a special meeting in Baton Rouge Tuesday.
Following the recommendation of the Louisiana Tech presidential search committee and a final interview by the full Board of Supervisors, Guice was officially approved by the full Board and will assume office, effective July 1, 2013.  Guice will succeed current Louisiana Tech President Dan Reneau, who announced his retirement in September after serving 26 years as president.
“I am tremendously honored to have been selected to lead Louisiana Tech into the future,” said Guice.  “The confidence that the Board has shown in me and the support I’ve received from the Tech family has been amazing and so very much appreciated.  I am looking forward to working with the University of Louisiana System Board of Supervisors to advance Louisiana Tech, locally and nationally.”
Guice was one of nine qualified candidates from across the nation who applied for the Louisiana Tech President position.  In early November, he was selected as one of two semifinalists who would interview on the Louisiana Tech campus, along with Dr. Duane Hrncir, acting president of South Dakota School of Mines and Technology. 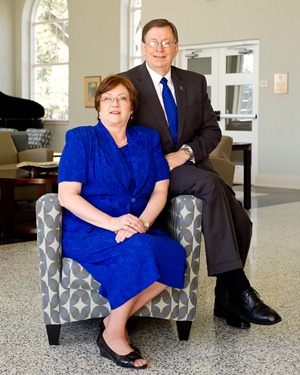 After interviews and meetings with the presidential search committee and campus constituents last week, the search committee unanimously selected Guice as its finalist for the Louisiana Tech presidency and recommended him to the full Board of Supervisors.
“The Board could not have done a better job of reaching out to applicants nationwide, thoroughly vetting and interviewing the candidates, and selecting the absolute best person to lead Louisiana Tech into the future,” said Reneau.   “I am extremely happy for Les Guice and believe that he is the right person, at the right time, and in the right position for Louisiana Tech.”
Guice’s relationship with Louisiana Tech spans four decades – both as a student and 34 years as faculty member and administrator.  He earned a bachelor of arts in architecture in 1976 and a master of science in civil engineering in 1978, both from Louisiana Tech.  Guice went on to earn a Ph.D. in civil engineering from Texas A&M University in 1986.
Guice began his professional career at Tech as an assistant professor in the department of civil engineering and worked his way up to become dean of the College of Engineering and Science.  In 2004, he was appointed Louisiana Tech’s Vice President of Research and Development and led Tech’s rise to a Carnegie Foundation Research University/High Research Activity (RU/H) institution and worked closely with Reneau to establish Louisiana Tech’s research park, Enterprise Campus.  In addition to his other duties, Louisiana Tech appointed Guice its Executive Vice President in 2012.
Several of Louisiana Tech’s research programs and major research centers were formed, developed, and focused under Guice’s leadership including the Trenchless Technology Center, the Institute for Micromanufacturing, the Center for Entrepreneurship and Information Technology, and the Center for Secure Cyberspace.
Louisiana Tech will now begin the process of establishing a team to assist in the transition of leadership.  Guice will officially assume leadership on July 1, 2013.