An enormous and explosive mass of electrically charged solar plasma – known as a coronal mass ejection or CME – exploded from the sun’s atmosphere a few days ago and is moving closer and closer to Earth.
Although it sounds like the storyline from a blockbuster sci-fi movie, Dr. Lee Sawyer, a physics professor at Louisiana Tech University, says this activity is simply part of the sun’s cycle.
“The sun goes through a cycle of increased solar activity every few years and right now we’re in the middle of one of those cycles,” said Sawyer.  “We’ll likely continue to see a lot of these events over the next two years.”
Sawyer says that a larger than normal number of solar flares and sun spots are usually associated with these intense solar cycles.  Although forecasters do not expect the CME to reach the Earth’s poles until the middle of next week, there is already a 30 percent chance of geomagnetic storms today at the poles as the mass moves closer.  The plasma mass has to travel 93 million miles to reach Earth’s atmosphere. 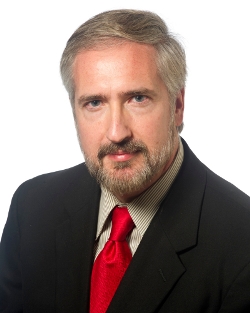 “This is not the largest CME we have ever seen and it might not affect anything here on Earth…but there’s also a chance it could,” Sawyer said.  “The Earth’s magnetic field could be slightly disrupted as the CME hits, which could mean cell phone outages, and disruptions in satellite reception and radio reception.  The further north you are, the worse it would be.
“The good news is that we will be able to see brighter and more intense auroras at the poles and outwards.”
Sawyer earned his Ph.D. in experimental particle physics at Florida State University in 1991 and joined the physics faculty at Louisiana Tech in 1997.  He has started a high energy physics group, which has grown to include three faculty members, two postdocs, and several Ph.D. and masters students.  He has played an active role in the development of detectors for high energy physics experiments, the design of software for large detector systems, and distributed computing systems.
As a graduate student at CERN during the time the World Wide Web was first developed there, Sawyer setup one of the first academic web servers in the United States in 1992. He was inducted into Sigma Pi Sigma as an undergraduate physics major at Northeast Louisiana University (now the University of Louisiana – Monroe) and has previously served on the Sigma Pi Sigma national council.
Written by Catherine Fraser – cfraser@latech.edu