Louisiana Tech students Katie Falgoust, Sidney Hernton, and Joshua Wheat accompanied Wayne Hogue, Shreveport-Bossier City program coordinator for Louisiana Tech University, to the United States Air Force Academy to attend the 20th Annual National Character & Leadership Symposium (NCLS) – one of the premier leadership and character development conferences in the nation.
The NCLS, held last week in Colorado Springs, is hosted by the academy’s Center for Character & Leadership Development (CCLD) and managed by academy cadets and CCLD staff.  This year’s theme was “The Silver Lining: Courage Through Adversity.”
“NCLS represents one of the highlights of my leadership and character development teaching career,” said Hogue.  “It’s an incredible honor to get to participate in such a significant event where ‘life-changing’ is the description most often given by the students who attend NCLS.  It is immensely gratifying to know that the experience from those three days at the Academy will have a tremendously positive impact on guiding the students throughout their careers and lives.”
According to the NCLS, the symposium seeks to give the entire academy corps of cadets and faculty the opportunity to engage in dialogue with distinguished scholars, military leaders, corporate executives, world-class athletes, and others to explore character and leadership related themes. 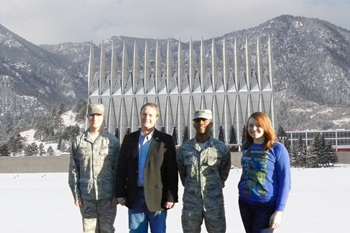 The Louisiana Tech contingent was among a select group of about 200 non-academy personnel afforded the honor of attending the prestigious event.
“The trip to the Air Force Academy and NCLS 2013 was amazing,” said Hernton.  “Meeting high ranking Air Force officers with truly inspiring tells and speeches in an amazing setting is a very humbling experience that not many people get to have in their lifetime.  The NCLS can benefit the students at Louisiana Tech by teaching them life lesson on how to conduct one self, never give up, stand strong, be courageous, take control of a situation, and have a positive outlook on everything.
“These things, when said to students, can give them the motivation needed to help their mindset with classes and other aspects of life on a college campus.”
A few of the dignitaries and speakers participating in NCLS 2013 included:

Visiting student attendees were housed in on-campus academy dorms with cadets while at the conference, giving them the rare opportunity to experience firsthand what life is like for military academy cadets.  The Louisiana Tech students came away with a deeper understanding and appreciation for leadership and character, but also an enhanced respect and admiration for Air Force personnel.
The Louisiana Tech group was even presented with an unexpected opportunity to overcome a difficult and “chilling” situation when a snowstorm prevented their flight from landing at Colorado Springs, diverting them instead to Denver, where the flight was subsequently cancelled, stranding them and seven other NCLS attendees at the Denver airport.  In concert with the NCLS 2013 theme; courage, creative thinking and leadership skills were needed to successfully handle the adversity.
Written by Wayne Hogue – whogue@latech.edu