Two hundred ninety-six individuals became graduates of Louisiana Tech University on Saturday, March 2, and, as keynote speaker Steven Davison pointed out, being noted as a graduate of Tech is a proud achievement.
Davison, an attorney and developer of Squire Creek Country Club in Choudrant, explained to the new graduates that for a university to be great, alumni must be ready to contribute.
“You’ve been prepared by this institution to fulfill a service,” said Davison, a 1989 graduate of Tech. “When you’re called upon, answer the bell. Step up to the plate.” 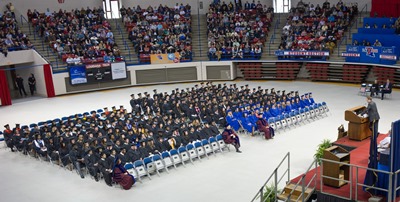 Davison told students to care and make a difference.
“Be a good representative of this university,” he said. “This place needs your help if it’s to remain great.”
Many of the new graduates took his advice to heart, such as Amanda Davis, William Gunter and Jessica Ables.
Davis, who received her bachelor’s degree from the College of Engineering and Science, said she has already signed up for graduate school at Tech. Davis, a mathematics major, will begin work on her master’s in teaching next quarter.
“It’s exciting. It doesn’t seem real,” Davis said. “I’m going to graduate school here, and I still want to go to all the games.”
Ables, who received her associate’s degree in nursing, said she chose Tech because of the nursing program’s stellar reputation and plans to still support the university by attending the football games.
“I’ll definitely be at the football games,” Ables said. “I try to be at every one.”
Gunter, who majored in accounting, said he will continue his educational pursuits at Tech with a master’s program. He said chose Tech for his undergraduate and graduate programs for a plethora of reasons.
“There’s a lot of great things about Tech,” he said. “Academically, the professors are very knowledgeable. It’s a great university. There’s a lot of tradition and pride.”