Louisiana Tech is the tie that binds 340 United States Marine Corps rookie officers of the 1940s.
The group of young men, then-potential officers, arrived on the Ruston campus as ordered on July 1, 1943. After various tri-semester segments of instruction at Louisiana Tech, members generally departed for boot camp and officer training in North Carolina and then Virginia. 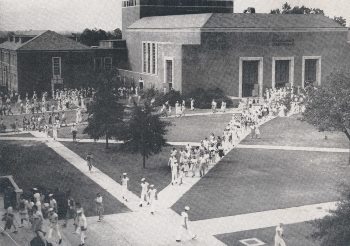 Louisiana Tech V-12 ‘student-Marines’ walk through the Quad in 1943.

The men were part of the U.S. Navy V-12 Program, aimed at selecting young candidates who could be educated physically and mentally in a shorter than average amount of time, the Navy felt, then commissioned as officers to aid the War Department’s intense need for young leaders in World War II.
The group has held several reunions since, including four at Tech, 1977-80, and also in 1983 to celebrate their 40th reunion. There were a dozen more reunions through the years at other sites.
Now, the group is officially “ringing down the curtain on our active, post-war, Louisiana Tech Marine organization,” wrote original member Dewey Smith in October in the last official newsletter to the group.
“It becomes increasingly clear,” Smith wrote from his home in Corpus Chrisi, Texas, “that factors such as age-induced infirmities, deaths, moves to assisted living facilities, and other myriad reasons, including this writer’s decreasing competency level, constitute and overall environment that does not allow lines of communication sufficient to maintain such effort.” 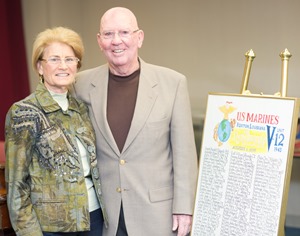 Dewey Smith and his wife, Chris.

As the group’s last official act, Smith, now 89, and his wife, Chris, came to the Louisiana Tech campus and, as on behalf of his fellow V-12 Marines/classmates, donated all the organization’s records to Louisiana Tech’s Department of Special Collections, Manuscripts and Archives in the Prescott Memorial Library.
Members of the media, community, campus, as well as WWII veterans were on-hand for the presentation ceremony.
“We are highly pleased (with Tech’s response) and look forward to seeing the Tech Marine Legacy perpetuated,” Smith said.
Archivist Peggy Carter, who has researched Tech’s involvement in the war effort and continues to do so to acquire as much of the tangible history as possible, accepted the records on behalf of the University.
Written by Teddy Allen – teddy@latech.edu