The three new busts join those of Albert Einstein, Dr. Martin Luther King, Jr., Anne Frank, and Voltaire in Spirit Park, which is located between Davison Hall and the Biomedical Engineering Building on the Louisiana Tech campus. 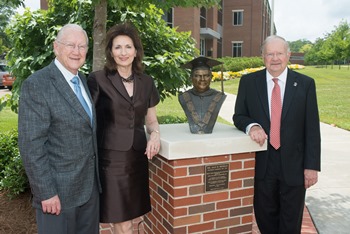 “All three of the Louisiana Tech presidents being honored today share three distinct qualities that made them such effective leaders,” said John D. Caruthers, a Louisiana Tech benefactor and the 2006 Alumnus of the Year.  “Each was a people-person, had outstanding leadership abilities from the beginning, and had a genuine interest in the academic quality of Louisiana Tech.

“It’s always good to come back to one’s alma mater, be joined by friends and to give back to such a special place like Louisiana Tech.”

Led by Caruthers and his wife Jane, Spirit Park was established in 2000 as a gift from several donors from the Class of 1950 to mark their golden anniversary.  The park was enhanced in 2008 to include a fountain, benches, the memorial busts on brick columns, and a bronze logo at the park’s center.  Caruthers wanted it to be a place of contemplation and meditation for all who visit.

Reneau, who will retire at the end of next month as Louisiana Tech’s longest tenured president, said that Caruthers has been among the most generous and supportive of Louisiana Tech’s more than 93,000 alumni.

“Louisiana Tech is fortunate to have and have had so many faithful alums and supporters who have helped to create the outstanding university we are today,” said Reneau.  “John D. Caruthers is among the most special benefactors of this institution, and this park will long serve as a symbol of his love for and his dedication to Louisiana Tech.”

A native of Shreveport, Caruthers graduated from Louisiana Tech with a degree in political science.  While at Tech, he served as Student Senate President and was involved in a number of campus activities and organizations.  Following his graduation from Louisiana Tech and later, LSU Law School, Caruthers began what would become a highly distinguished business career in Shreveport.

In 1996, he was named Shreveport’s Business Leader of the Year by the Shreveport Times and, in 1998, was honored by the Greater Shreveport Chamber of Commerce with its Chair Award for extraordinary community volunteerism.

With all of his business, volunteerism and philanthropic recognitions over many years of service, Caruthers heart has always led him back to Ruston, his beloved Louisiana Tech, and the people he has chosen to honor in Spirit Park.

“These busts are amazing works of art and so are the people they celebrate here this afternoon,” said Corre Stegall, vice president for university advancement at Louisiana Tech.  “Each of them has led Louisiana Tech through good times and bad times, but through their commitments and contributions to this institution, we are a far better university because of them.

“We thank the Caruthers for their dedication to Louisiana Tech and for honoring three legendary presidents and 64 years of outstanding leadership.”