A near record 879 graduates began their journey on the road of life Saturday during commencement exercises at Louisiana Tech University.

And a golden couple took one more step on their happy journey to retirement.

Louisiana Tech President Dan Reneau presided over his final graduation ending an over 50-year association with the university as his wife Linda, also a Louisiana Tech graduate, looked on. 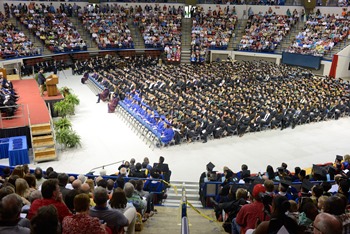 Reneau’s 26-year tenure as president was the backdrop for the afternoon’s commencement address by keynote speaker, Joe M. Pullis, professor of business communication in Louisiana Tech’s College of Business.

Reneau said he wanted to do something different in choosing the speaker for his last graduation exercise and he wanted to find someone reflective of his career.

Pullis spoke of a series of life lessons that he learned as a result of his 40-plus year relationship with Reneau and Louisiana Tech.  Pullis joined the Tech (then Louisiana Polytechnic University) faculty in 1967, only hours before Reneau signed his own contract with the school.

“I signed my contract that day in Dean Virgil Orr’s office in Keeny Hall,” Pullis said. “After signing, we stood and shook hands, and I asked him if there would be many more new faculty members.

“Dr. Orr said ‘No, but we did get our first-round draft pick,’” Pullis recalled Orr referring to a young Dan Reneau.

Thus began Pullis’ interweaving of life advice to the graduates while chronicling Reneau’s many successes as Louisiana Tech’s 13th and longest-serving president: 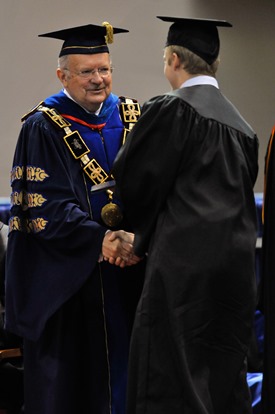 After a litany of Reneau’s achievements, Pullis then made a proposal to two prominent podium guests – University of Louisiana System board of supervisors chairman Wayne Parker and Louisiana Board of Regents member Bob Levy.

“Doesn’t something like the Reneau College of Engineering sound good?” Pullis humorously asked as the crowd erupted into applause.

In a statement directed to Parker and Levy, Pullis said, “You can report to your groups that this proposal has received a yes vote in North Louisiana.”

At the conclusion of the address, Pullis talked about Tech’s future under President-elect Les Guice who officially takes the reins of the university on July 1.

“Tech no doubt will move forward in the 21st century with Dr. Guice having one distinct advantage — he’ll be standing on the shoulders of an academic giant.”

In addition to recognizing the graduates, Reneau also bestowed honorary doctorates on Jack E. Byrd of Minden and Benjamin Denny of Ruston, in recognition of extraordinary, lifetime service and contributions to Louisiana Tech.  “These men have meant so much to Louisiana Tech and to my presidency.  Louisiana Tech owes a great debt of gratitude to both of these special Bulldog alums,” said Reneau.

Reneau also recognized the contributions and unwavering support of Wayne Parker, chair of the University of Louisiana System, and Bob Levy, immediate past chair of the Board of Regents, with Louisiana Tech’s Distinguished Service Awards.  He also announced the establishment of two endowed professorships in their names.

Before he began conferring degrees for the final time, Reneau said he felt good about the way he was leaving the university.  “It’s with a sense of pride that we’re leaving the school in the very capable hands of Dr. Guice and an outstanding faculty and staff,” Reneau said.
Written by T. Scott Boatright – boat@latech.edu