The key was cut at the Louisiana Tech campus locksmith shop in 1987. Off-center and a bit crooked, “1620” is engraved into its back.

That number is the same as the number above the office door that leads to the Louisiana Tech president’s suite on the 16th floor of Wyly Tower. This is the key that opens the most exclusive door on campus, into an office where the buck stops every day.

It looks like several others of the 20 or so keys on the simple round chain, one Dan Reneau can’t remember getting.

“It’s just a regular old key chain,” Reneau said. “No telling where it came from, but I don’t know…I’ve grown kind of attached to it.” 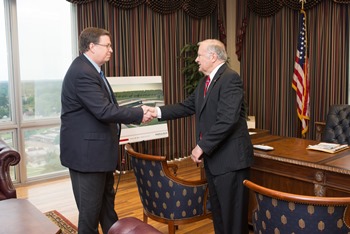 And to the key. But not so attached that Dr. Dan Reneau, president of Louisiana Tech for 26 years and associated with the school as a student, professor or administrator for more than half a century, couldn’t turn it over when it was time.

In a small, private, understated key ceremony in the President’s Office just after noon Friday, he did just that. It was Reneau’s final official act as president. Accepting the key was, unofficially, the first presidential act of president-elect Dr. Les Guice.

Guice, groomed by Reneau and unanimously approved by the University of Louisiana System Board of Supervisors in December as Tech’s 14th president, takes over Monday, the first day of both July and the state’s new fiscal year.

“26 years ago today, F. Jay Taylor and I stood in this same office and he handed this same key to me, transferring not just occupancy of the office, but the authority and responsibility of the presidency of Louisiana Tech,” reflected Reneau.  “I can’t think of anyone else I would rather pass this key along to than Dr. Les Guice.  There’s simply not a better man for the job.”

Guice will have a big office and big shoes to fill.  Considering his time and place on the stage in such a quickly changing world, add to that an educational brilliance and a willingness to mix patience with risk, Reneau retires as arguably the most effective overall president in the University’s 120 years.

His workday was completed after his welcome of Guice. It had begun when Reneau got up a bit before 7, which dawned warm and clear. He dressed in his customary suit and tie, ate some fruit and – another custom – had an egg. A biomedical engineer, Reneau has, not surprisingly, studied the egg. Thoroughly.

The same could be said for Reneau, who gave the state its money’s worth. The campus under his watch has grown in academic reputation and standing both national and internationally. Monday, the University will enter a new athletic affiliation, Conference USA. Even in the toughest budget crisis of his career, Reneau has guided Tech expansion – including the innovative Enterprise Campus — during the past four years.

Reneau always showed up for duty. Earlier in his final week as president, Reneau had donated more than 7,185 hours of accrued sick leave – more than three years’ worth – to the University Shared Sick Leave Pool. He left another year’s worth of annual leave on the table.

He also left behind mandatory meetings in Baton Rouge, something he won’t miss. During the past 33 years, as president and a University vice president, he’s been on the road either to or from Baton Rouge at all hours of the day or night. “That includes 2 or 3 or 4 in the morning,” he said. “I’ve gone twice in a day; I’ve gone, come home, and had to turn around and go right back.”

That’s in the rearview mirror now. After a year that’s been “as occupied” as any of the previous 26, he said, he can now take a break in July for much family time. He’ll take a trip to Las Vegas with his wife of 52 years, Linda, to visit their son, John, then a family vacation with his daughter, Dana, and her family overseas in mid-summer. He’ll fish a little and “get ready for the fall,” he said, “and for hunting.”

He can now drive where he wants, which is just what he did Friday as he left Wyly Tower for the final time as the University’s president. He drove a last lap through campus, then down Dan Reneau Drive in Ruston, then to Choudrant and Squire Creek, to the new home he and Linda share.

But before he and Linda left Wyly Tower 1620 for the final time, the 13th President received a first from the 14th – the first of a very limited number of Presidential Medallions that Guice has created to recognize those who have gone “above and beyond” for Tech.  Emblazoned with “Commitment,” one of the twelve Tenets of Tech, and the Louisiana Tech Seal, Guice thought of no other when deciding who would receive the first of his Presidential Medallions.

Guice and wife Kathy have begun moving into the presidential on-campus home at 1500 Bulldog Drive, and Guice will this week move into the 16th floor office. Reneau moved out earlier, boxing many plaques, many memories of his time on campus, including the shadow box containing the slide rule he used as a student when he began studying engineering at Tech in the fall of 1959.

What’s in what box, he isn’t sure. But most of them are in Hale Hall in his newest on-campus office. Here he’ll handle correspondence and remain as busy as he wants as part of a higher education “think tank.” He’s worked for someone since he was 13. At age 73, he won’t completely stop now.

But his first visit to his Hale Hall office, well, don’t hold the clock on him. It won’t be too soon. When he decides to unpack and work a few hours, he won’t have to ride an elevator to the highest point in Lincoln Parish anymore. He has a first-floor office now. With an outside entrance.

Tech has already given him his own new key.
Written by Teddy Allen – teddy@latech.edu