Since receiving the Best of Small Tech US National Innovator Award in 2008, Dr. Yuri Lvov, researcher and professor of chemistry at Louisiana Tech University, has continued to gain worldwide recognition for his work in micro and nanotechnology.

Lvov, who also holds the Tolbert Pipes Eminent Endowed Chair in Micro and Nanosystems, most recently had research published that involves the use of naturally occurring clay tubes measuring only a few billionths of a meter in diameter.  Such tubes are called nanotubes because one nanometer equals one billionth of a meter. 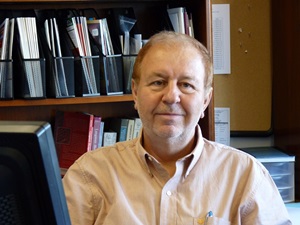 One of the many ways Lvov’s research impacts our lives is by allowing the slow release of drugs, such as antiseptic creams, which are loaded into the clay nanotubes and released over the course of days and months, providing extended healing capabilities.  The nanotubes can also enable the drugs to be targeted and released in a certain area of the body.  For example, cosmetic creams are a similar application where vitamins can be released to the skin over a period of up to one week.

“We are the first in the world, and still leading, in using clay nanotubes in these applications,” said Lvov. “I feel very lucky to still be riding at the top of the wave because big universities and companies in China, Germany, and Japan are investing huge amounts of money in this area.”

Dr. Lvov’s clay nanotubes, compared to many other nanotechnology methods, are of interest to industry because they are inexpensive and all natural.  Compared to the typical and expensive materials used in nanotechnology, clay nanotubes are available in thousands of tons at a very low price.  And being natural materials, these nanotubes are not harmful to the environment and are processed following “green” chemistry processes.

Lvov’s nanotubes research was published in “Progress in Polymer Sciences,” which ranked on a scale called the “impact factor” that is commonly used to rank scientific journals, measures 22.9, putting it among the most cited science journals in the world.  Scientists often rank themselves using the number of times their work is cited by others on a scale called the Hirsch index.  Lvov’s work has been cited over 11,000 times and his Hirsch index is 53, which puts him among the most cited chemical scientists in the world.

Another application for Lvov’s research is found in protective coatings on industrial products, such as valves, ships, and plastics.  In this case, instead of filling the nanotubes with medicine, the tubes are filled with chemical compounds that prevent rust, fire, or bacteria, depending on what is needed in each application.  Schlumberger, an oil and gas company operating in over 85 countries around the world, has partnered with Lvov to use his technology in their products.

Lvov’s research has opened doors around the world not only for himself, but also for the students working in his lab. His students have taken part in international collaborations such as the G8 (Great Eight Nations) Collaborative Project, working with Max Planck Institute in Germany,  National Institute of Materials Science in Japan, and Moscow State University in Russia.  These centers are among the world leaders in materials science, and Lvov’s students have been able to combine their engineering expertise with their international research partners’ deep knowledge in chemistry and microbiology.

“My experience working for Dr. Lvov has been invaluable for my personal and professional growth,” said Joshua Tully, chemistry major from Bossier City.  “I am surrounded by intelligent people who have just as much passion as I do for science.  I can confidently say that my association with Dr. Lvov has significantly enhanced my education here at Louisiana Tech.”

Dr. Stan Napper, vice president for research and development at Louisiana Tech, says “Yuri has long been recognized as our chief scientist in nanotechnology and is among the leaders in the world.  He is especially valued as a member of the Louisiana Tech family because of his equally significant contributions to undergraduate and graduate education, basic science research, and to applied research leading to commercializable solutions.”
Written by Alicia Boudreaux – aliciab@latech.edu