Home › General News › Caruthers, Neilson dorms being demolished, but not the memories

Caruthers, Neilson dorms being demolished, but not the memories

The long-faithful dormitory duo of Caruthers Hall and Neilson Hall is being demolished by a wrecking ball this month, something Louisiana Tech male students couldn’t do over a span of 40 years.

The high rise homes have been out of commission as dorms for men for a few years now, replaced with nearby apartment-style dorms bearing the same honorary names. The site will likely be developed as green space, recreation fields, parking or modern dorms; those plans, unlike Caruthers and Neilson, remain up in the air.

To note their passing, some final vital stats for each: 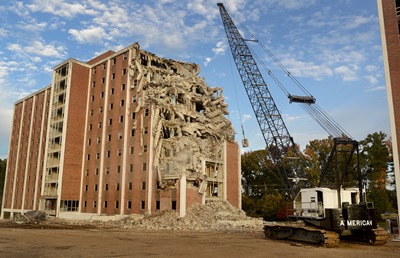 Caruthers: Opened 1966; eight stories; capacity, around 600; named after Shreveport businessman John D. Caruthers, Sr.; built for $1,746,620; closed in the summer of 2005 but rushed back into service during Labor Day weekend as a Hurricane Katrina shelter.

Neilson: Opened 1968; 11 stories; housed around 760 men; tallest dorm on campus; named after Patrick Douglas Neilson, who retired from the University in 1949 after serving as an instructor in electrical engineering, as Dean of Men and as head of the physics department; built for $2,740,188; closed at the end of 2009’s spring quarter with the opening of Park Place dorms by the University’s “Old Main” entrance that fall.

The amount of the contract with Gulf Services Contracting is $1,094,092. The price includes removal of the Married Student Housing structures on South Campus, already gone and seeded for grass. Asbestos and material that can be recycled was removed from the dorms before the wrecking ball began on Neilson’s southeast corner; the buildings should be down by Christmas; the contractor is scheduled to be finished by mid-January.

What won’t disappear are the memories, the stories of what happened in those dorms’ 19 stories over four decades. The Louisiana Tech Alumni Association posted on its Facebook page a picture of the two dorms with this caption: “They’re coming down — Neilson and Caruthers! Oh, if those walls could talk …” The page got hundreds of likes and 100-plus comments, many expressing a certain amount of gratitude that the walls, conveniently, would never be able to squeal.

Matth Wisterman of Shreveport is currently building movie sets in Georgia, and United Airlines pilot Jay Henderson of Baton Rouge lives in Maine. The friends didn’t room together but each graduated in the early 1980s and lived in Neilson.

“I spent a couple of quarters in Neilson, eighth or ninth floor, facing south,” Wisterman said. “We used to pour trashcans full of water out the window; I don’t know why.

“There was a cricket invasion that fall,” he said. “The building was full of crickets. I was a lot happier after moving to Robinson (dorm) that spring.”

“I threw a jar of peanut butter out the window from the ninth floor, facing the railroad tracks,” Henderson said. “We were experimenting with dropping stuff long before David Letterman starting doing it. I had to go see ‘the man.’ Probation for a quarter.”

And the peanut butter, when it hit the patio concrete below?

“It literally exploded,” he said. “I guess like when a paint ball explodes. And the lid, it took off flying like a Frisbee, like it was shot.”

“I’m so sad that my old LA Tech home of 205 Neilson will no longer exist,” said Blaine McKinney, Class of ’78 and a Bossier City native who’s now a Delta pilot, living in and flying out of Detroit. “I broke the Tech ‘law’ by constantly taping up my favorite pin-up girl of the ’70s — Farrah Fawcett!”

Using tape to put up posters was against the rules.

“I even got called into the dean’s office a couple of times and they gave me warnings,” McKinney said. “But you know what?: sometimes you have to stand by your principles and never give up. That picture remained as the centerpiece of our dorm room wall for four years. After all, you have to keep a high morale!”

David Holland lived in Jenkins and the one-story Sigma Nu fraternity house, but he also did time in both Caruthers and Neilson.

“It was a good thing for me; it was fun,” said Holland, Class of ’81 and ’84, now in sales in Texas. “Remember you didn’t have TVs or cell phones or computers; you watched television in the big room downstairs. And weekends, you watched movies in Howard Auditorium.

“But you knew the elevators were going to go out, about once a week” he said. “And you learned that 80 guys on a floor have a high tolerance for filth.”

Removal of the “zillion years old” dorms will definitely change the look of the campus, Holland said. And the new dorms are so nice they make his old digs look “archaic.”

“My nephew just graduated from Tech; he lived in the new dorms, the apartments,” Holland said. “You know, the ones close to the pool. Things were a little different for him than they were for me.”

Class of ’81 graduate Mike Hilton, an electrical engineering major, is from Natchitoches and today works for Cleco Power. The majority of his residence time was in Caruthers, seventh floor.

“Living in the dorms back then was a real crapshoot if you didn’t know anyone because they paired you with whoever was on the list,” he said. “The waiting list to get into one of the three air-conditioned dorms was formidable.”

The plusses of “upper-class dorm living,” Hilton said, were the relative quiet, the dorm mother to help with problems, and TV watching in the “big room: ‘Star Trek,’ ‘M*A*S*H’ and the news.”

Plus you didn’t have to clean the bathroom. But those same bathrooms and showers were communal, so there was no privacy. And, Hilton said, “It took the maintenance people a while to change over to AC from heat and they never seemed to get it done before the heat of the spring or the cold of the fall.

“When I saw that the buildings were to be razed I was saddened but realized they’ve more than outlived their usefulness,” Hilton said. “Just get them down, before they give up all our secrets.”
Written by Teddy Allen – teddy@latech.edu