Louisiana Tech’s Counseling and Career Services worked with 775 students and more than 100 companies this past week at its annual Spring Career Day.
Ron Cathey, director of Counseling and Career Services, said some interviewed students they met at Career Day.
“We had eight companies who interviewed 55 students for positions,” Cathey said. “We have other companies who will come back on scheduled dates.”
Cathey said last week’s poor weather kept some companies from being able to attend the event, but several new companies chose to attend the Career Day.
“We had 15 companies who had never recruited at Tech at this fair,” he said. “We were very pleased.” 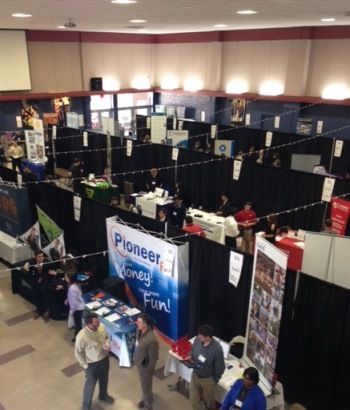 Adreanne Liggins, a delivery manager for IBM, is a 2000 alumna of Louisiana Tech and said it was her first time to recruit at Tech.
“It’s a good turnout despite the weather,” Liggins said. “I think I’ve found a lot of candidates. The students here will be good for our company.”
Liggins said she would definitely be coming back to recruit at future Career Days.
“Students here have great communication skills and a solid foundation for the skills we’re seeking,” she said.
Sarah Brown, an English graduate student, said she was looking for companies interested in hiring a technical writer.
“This was better than I expected it to be,” Brown said. “Each company was very welcoming. Some companies made you feel like you could be a successful part of their company.”
Davis Brown, a junior electrical engineering major, said it was his first time to attend a Career Day.
“I’m looking for an internship, and my professor said to go sign up,” Brown said. “I’ve talked to two companies so far. Both were informative.”
Cathey said the Counseling and Career Services have several other events planned for the year. The next career event will be Teacher Recruitment Day, scheduled for April 3. Then, there will be a career fair from 10 a.m. to 2 p.m. April 26 at the Bossier Civic Center. Also, the Fall Career Day will be Sept. 25. For more information contact the Counseling and Career Services at 318-257-2488 or visit its website.