The investiture of Leslie K. Guice, Ph.D. and the official conferral of office and authority as the 14th president of Louisiana Tech University will take place at 2:00 p.m. Tuesday, April 8 in the Howard Center for the Performing Arts on the Louisiana Tech campus.

Louisiana Tech faculty and administrators will gather with alumni, distinguished guests and higher education leaders from throughout the State of Louisiana to honor Guice and to witness his official installation and reception of the presidential medallion, signifying his acceptance of office and the authority and leadership responsibilities of the institution. 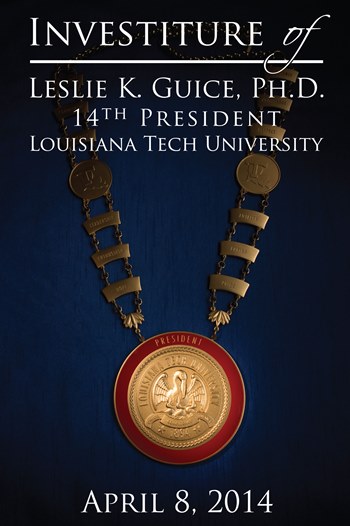 The public is cordially invited to join Guice and the Louisiana Tech family in Howard Auditorium for this historic event.

“President Guice’s official investiture will be a significant event in the history of the University,” said Corre Stegall, vice president of university advancement and chair of the investiture committee.  “The official transfer of authority to Louisiana Tech’s fourteenth president will be a beautiful, traditional ceremony.  This is the 120th anniversary year of Tech’s founding and it speaks to the stability and quality of the leadership that there have been only thirteen presidents who have served during that length of time.  All alumni and friends of the University are encouraged to be a part of this event.”

The investiture is considered among the oldest of traditions in academia.  Originating in English universities and modeled after highly dignified knighthood ceremonies, investiture comes from the Latin phrase for “dress in robe” and is an academic ceremony which has symbolized the pursuit of knowledge since the Middle Ages.  Today, universities view investitures as opportunities to welcome a new era and celebrate as a community.

In academic circles, the term has come to mean one who will literally don the university’s insignia and regalia to lead the institution.  The investiture ceremony is traditionally held during the new president’s first year in office, or at the conclusion of the first year.

Guice assumed the presidency of Louisiana Tech on July 1, 2013, succeeding Dr. Daniel D. Reneau, who had led the university for 26 years and retired as the longest tenured president in the history of the institution.  Following a national search and a series of public forums and interviews, the University of Louisiana Board of Supervisors unanimously appointed Guice as Louisiana Tech’s 14th president in December 2012.

After graduating from Louisiana Tech with a bachelor’s degree in architecture in 1976 and a master’s degree in civil engineering in 1978, Guice earned a Ph.D. in civil engineering from Texas A&M University in 1986.  His passion for teaching and education would earn distinction within the university and a number of accolades and leadership positions.  Guice’s dedication to his students, colleagues and university would lead to his appointment as dean of the College of Engineering and Science in 1999.

Guice also led the establishment of Louisiana Tech’s first two technology incubators, the Rawle and Humana Enterprise Centers, and the planning and development of the Louisiana Tech Enterprise Campus – a research park connecting the university with downtown Ruston and industries throughout north Louisiana.

The investiture ceremony will commence with an academic procession that includes delegates from other colleges and universities, as well as select faculty, student and administration delegates from Louisiana Tech.  The ceremony will include musical selections, greetings and comments from several university and community groups, the presentation of the symbols of office, the president’s address, and the singing of the Louisiana Tech alma mater.