Guice ‘honored, grateful’ for opportunity to lead Louisiana Tech into the future

University of Louisiana System President Dr. Sandra Woodley officially conferred upon Guice the office and authority of the presidency and was joined by University of Louisiana System Board of Supervisors Chair E. Gerald Hebert to present Guice with his presidential medallion.  Members of Guice’s family including wife Kathy, mother Marguerite, brother Gary and family, and sons Kyle, Chad, and Bret and their families were on hand to witness this historic event. 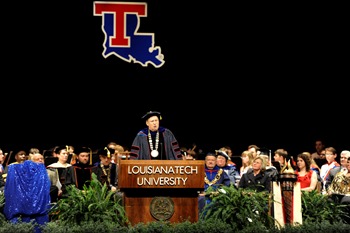 “I remember sitting in this auditorium as a young faculty member on February 20, 1987, when the Board of Trustees recommended and appointed Dr. Daniel D. Reneau as the 13th president of Louisiana Tech University,” said Guice.  “Never could I have imagined that I would have the opportunity to serve as a faculty member, an administrator, and ultimately the president of this great institution.  I am most honored and privileged to lead Louisiana Tech into the future as its 14th president.”

Shortly before the investiture ceremony, Guice and family participated in the planting of his presidential tree along the alumni walkway leading to Centennial Plaza.  The red maple joined those of the other 13 Louisiana Tech presidents, representing strength and stability in leadership at the university throughout its 120 history. 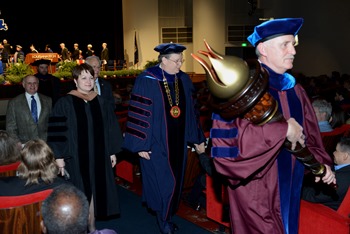 “The stability of and confidence in presidential leadership as well as the tremendous  commitment, integrity, and enthusiasm demonstrated by my predecessors has enabled Louisiana Tech to distinguish itself as a national university most effectively serving the citizens of the State of Louisiana,” Guice said.

Guice assumed the presidency of Louisiana Tech on July 1, 2013, succeeding Reneau, who had led the university for 26 years and retired as the longest tenured president in the history of the institution.  Following a national search and a series of public forums and interviews, the University of Louisiana Board of Supervisors unanimously appointed Guice as Louisiana Tech’s 14th president in a special session in Baton Rouge on December 4, 2012.

“I have always said that what we do at Louisiana Tech, we do with purpose, pride, passion, and honor,” said Reneau.  “I have known Les Guice for over 30 years as a faculty member and an administrator, and can tell you that he possesses all of these important qualities.  He is absolutely the right man, in the right place, at the right time to lead Louisiana Tech.”

In his address, Guice credited Reneau with transforming the campus, from its facilities, to its academic programs, to its athletics programs, to its research programs, bringing Louisiana Tech distinguished state and national recognition, and ultimately leading to its designation as a national research university by the Carnegie Foundation and a top tier ranking among national universities from U.S. News and World Report.

“Since the day I took office as system president, I have not encountered a single person that has not used superlatives to describe Les Guice such as strength, integrity, thoughtfulness, leadership, and I could go on and on,” said Woodley.  “From my first time visiting the campus, I knew that Louisiana Tech was a remarkable place and with Dr. Guice’s leadership, Louisiana Tech is sure to continue to reach new heights.”

Despite his sincere appreciation for his supporters and the accolades he received during the investiture ceremony, it didn’t take Guice long to look toward the future and share his vision for elevating Louisiana Tech to a position of even greater national prominence.

“Our world has become a global marketplace, where information, goods, and services are only a mouse-click away,” said Guice.  “As economic competitiveness increases globally, I believe that it is most important for Louisiana Tech, as an institution, to provide even stronger educational opportunities for our citizens.  We must continue in our pursuits to encourage the growth of knowledge jobs in our state, and we must be responsive to the needs of employers who have ever increasing demands for well-educated and highly-skilled professional.”

“Louisiana Tech’s success has always been measured by the success of its students and we have a long record of producing graduates who become exceptional leaders in their professions.  Our students will continue to be our first priority and we will always strive to provide them with an education that is second to none.”

Guice said that Louisiana Tech’s future success will be achieved largely through its comprehensive strategic plan with a focus placed on student recruitment and retention, innovative curriculum design and interdisciplinary student experiences, the elevation of research program to national prominence and maximizing the economic impact of Louisiana Tech’s innovation enterprise.  He also emphasized the importance of private support and strengthening public-private partnerships in Louisiana Tech’s long-term growth strategies.

“I know where this university has been, where it is now, and where it’s heading,” stated Guice.  “I’m fully committed to dedicating the full extent of my energy, experience, and abilities to leading this institution to the highest levels and that which the Tech Family and the State of Louisiana expects and deserves.”