Challenges met and challenges to be faced was the focus of Louisiana Tech University President Les Guice’s “State of the University” address Tuesday to faculty and staff at Louisiana Tech’s annual fall meeting.
“Last year, we sat here together talking about new beginnings and opportunities,” Guice said of last year’s convocation only weeks after his taking office as president. “I’d like to thank you for your continued support over the past year and your important roles in positioning our university for significant growth in the future. I believe Tech is in a strong position in the state and region and has a strong national reputation.” 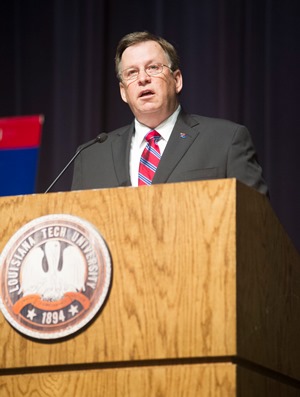 Guice also thanked legislators for being able to come with a state budget that provided for increased funding for higher education.
“Last fall, I stressed the importance of leadership at all levels and I’m pleased to see that great progress was made,” Guice said. “There were three important things that happened to help our situation. First, our base budget from 2013-14 was preserved with no additional cuts. Second, we will be allowed to retain revenues from tuition and enrollment increases. Third, the WISE (Workforce and Innovation for a Stronger Economy) Fund passed by legislators this spring will add $40 million into higher education to better develop students in high-demand jobs, and Tech will benefit.”
Guice said those moves by the legislature has definite and direct implications for Louisiana Tech, especially if the university is successful in continuing to increase enrollment. He also touted the strength of Louisiana Tech’s newest students and most recent graduates.
“Last year’s freshman class had one of the highest ever ACT average scores with seven new freshmen being National Merit Scholars and 79 having an ACT score of 32 or higher,” Guice said. “Tech students, on average, graduate in four and a half years which is the fastest time to completion rate in the state for first-time baccalaureates. We had 957 graduates during spring commencement – our largest graduating class ever. And over the past three years we’ve averaged nearly 50 doctoral graduates a year and had a record 20 doctoral graduates a couple of weeks ago at our summer commencement.”
Guice then shared with the faculty and staff his plans for increasing revenues through growing enrollments and how he planned to use those revenues to continue to operate and advance the university.
“A 10 percent increase in enrollment will mean several million dollars more for our school,” Guice said. “Our budgets are much more dependent on enrollment revenues than ever before and it’s a responsibility we all share.
“First, we have to make up approximately $1 million that we lost in one-time revenues from the state last year, and to make up for some additional restricted funds that were used. We have also made the decision to pay the ORP (Optional Retirement Plan) costs that the state cut out over the past few years. I felt that was very important to you and to our ability to recruit great faculty and staff to Tech.”
Guice was also determined to find ways to reward employees for their efforts and loyalty.
“We plan raises for our civil service employees, often our lowest paid workers. And I assure you that I will make it a top priority to reward the faculty and staff members for what you do to make this such a great institution. We’ll need to look at that at mid (school) year after we have an idea about our enrollment figures.”
From a physical infrastructure standpoint, Guice said Louisiana Tech’s is embarking on some new and exciting projects.
“We received $37 million in capital outlay funding from the state for a new, 110,000-square foot Integrated Engineering and Science Education Building,” Guice said. “Funding has been secured to add a wing to the College of Business Building. Architectural work has been completed and we hope to start the (construction) bid process soon.
And Guice talked about Louisiana Tech’s athletic success.
“We just finished our first year as a member of Conference USA, a pivotal move in the rapidly changing world of college athletes that will give us a voice in the changing face of the NCAA,” Guice said. “We have one of the top athletic graduation rates in the state, and last April we broke ground on the new South End Zone project, which will benefit our entire university.
“It’s those kind of successes, and people like you and your commitment, that have helped Louisiana Tech to continue moving forward over the past year, and will keeping us moving in a positive direction in the future.”
Written by T. Scott Boatright – boat@latech.edu