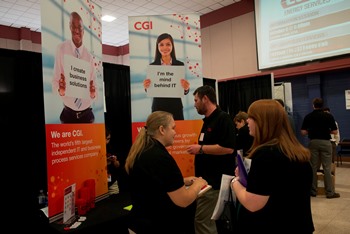 Dartez added that a record 169 companies attended the event to recruit Louisiana Tech students and soon-to-be graduates for full- and part-time employment as well as internships.
“It’s been a great day and things have gone smoothly despite the big crowd,” said Dartez. “That’s a tribute to our great staff who have helped put this together. If you’re a senior at Louisiana Tech, this is the event you need to attend before you graduate.”
Dartez said that many of the companies that attended the Career Day returned on Friday to conduct personal interviews with some the contacts they made, and will come back later on in the year for additional follow-ups with some of those contacts.
Ron Cathey, director of Counseling and Career Services, said a mix of sophomores, juniors and seniors attended the event.
“Some of the companies are recruiting for internships, and that’s where the sophomores come into play,” Cathey said. “But students should start looking and making contracts at least a year before graduation. Many of the companies here today are looking to fill full- and part-time openings they’ll have in May (of 2015), so the timing is right for both the students and the always-big May graduation class.”
Cathey said another Career Day will be held in February, where many companies looking for summer interns as well as May graduates.
Taylor Michels, a senior marketing major with a concentration in key account development and who is on track to graduate in May, said he was impressed with the latest Career Day event.
“There seemed to be a lot more organizations here this year,” Michels said. “I went to about 10 booths. There seemed to be more organizations looking for my major this year, which was a good thing. I made some good contacts with companies looking for just my kind of major and abilities.”
Sophomore Courtney Swafford, a sophomore computer science and Spanish major from Wilmington, Delaware, wanted to get her Career Day experience early.
“It’s a great opportunity,” Swafford said. “Because of my majors, I’m interested in a variety of potential jobs. I talked to one lady from Robins Air Force Base who told me about a potential job they had combining both of my majors, so that was exciting. It was a good experience.”
Written by T. Scott Boatright – boat@latech.edu