300 fall graduates challenged to be ‘bold and caring’

Be bold and caring.
That was the challenge issued by keynote speaker Dr. Phillip Rozeman to 300 Louisiana Tech University graduates Saturday during the school’s 310th Commencement Exercises at the Thomas Assembly Center. 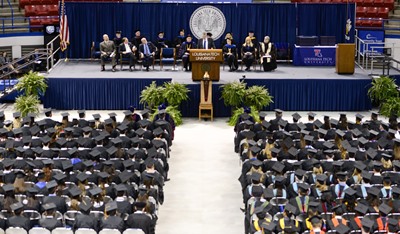 Louisiana Tech’s fall graduates were comprised of 206 undergraduate degrees and 94 graduate degrees, which included 10 doctoral degrees.
One of those graduates followed Rozeman’s advice and boldly blazed a new trail for himself and Louisiana Tech. Jeffery Adam Wiseman of Buffalo Grove, Illinois, became the first person to be conferred with a Louisiana Tech Ph.D. (biomedical engineering) as part of a joint Ph.D./M.D. program between Louisiana Tech and the LSU Health Sciences Center-Shreveport. Wiseman will now return to LSUHSC-S to complete his M.D.
“I still have a year and a half to go to finish the medical degree, but it’s still a big honor to be the first to complete the Ph.D. part of the program,” Wiseman said. “It’s so good to be part of this program which is set up to create physician-scientists who are also engineers. It’s an amazing program and will mean so much this region in the future.” 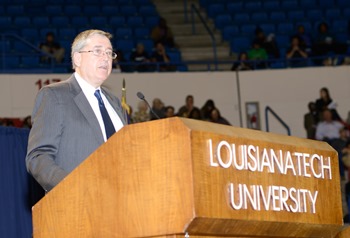 Rozeman, the founder of the largest cardiology group in north and central Louisiana, has been recognized over the last decade as one of “America’s Top Cardiologists” by the Consumer Research Council. He has served in several healthcare leadership positions including Chief of Staff and board member of the Willis-Knighton Health System as well as President of the Shreveport Medical Society.
During his address to Louisiana Tech’s newest graduates, Rozeman told the story of the murder of his son-in-law, and how friends and family showed their boldness and caring in helping Rozeman and his family in the aftermath of the death of his daughter’s husband.
“For me, boldness and caring is defined by the family and friends who packed up my son-in-law’s clothes when their house was sold a month later, because I just couldn’t do it,” Rozeman said. “It’s defined by my friends and colleagues who helped take over some of my workload as I tried to help my family in the weeks following the incident. And it’s defined by a patient of mine who left me a note reminding me to ‘Love like you’ve never been hurt, dance like no one is watching.’”
Rozeman began his remarks by thanking Louisiana Tech for providing tens of thousands of opportunities for its graduates and also gave thanks to those in attendance from the new graduates.
“The old proverb says that ‘It takes a village to raise a child,’” Rozeman said. “That’s especially true for these graduates who have all of you to thank for helping them get here today.”
He also encouraged the graduates to be ready.
“It’s customary for a keynote speaker to talk about the future,” Rozeman said. “But I have no idea what your future holds, or mine. I do know that the future always brings change, and change brings opportunity – be ready for it.
“Never be too busy to be a point of light in a dark world – too busy not to be gold and caring. Be bold in your passion, commitment and caring and when you sit at your grandchildren’s commencement 50 years for now, there will be no regrets.”
Louisiana Tech President Les Guice told the graduates it was a day to treasure for the rest of their lives.
“Many of those who began their college careers with you are not here today,” Guice said. “You set goals and you devoted yourself to countless hours of studies and research. You’ve made friendships that will last a lifetime and created incredible lasting memories of your time at Louisiana Tech. As you move on in life, you’ll forget many of the details from this ceremony, but you will never forget this day.”
Written by T. Scott Boatright – boat@latech.edu