Success for Louisiana Tech University’s football program is not just measured in TDs and FGs – it’s also measured in GPAs and GSRs.
The commitment that student-athletes and coaches for the Louisiana Tech Bulldogs have made to progress and success in the classroom has resulted in some of the highest graduation and academic performance rates in the State of Louisiana and among Conference USA schools. 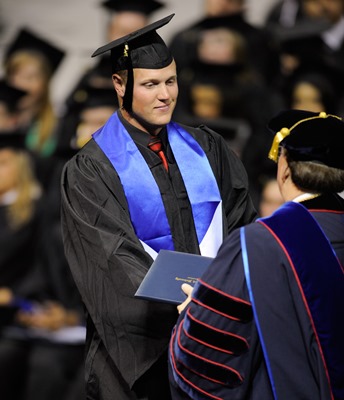 In the latest Federal Graduation Rate Report released by the NCAA in October, Louisiana Tech football student-athletes achieved a Graduation Success Rate (GSR) of 77 percent – the highest among all of Louisiana’s Division I football-playing public institutions and fourth highest in Conference USA behind only Rice, UT-San Antonio and Middle Tennessee State. Tech also boasts the second highest federal graduation rate of any Division I football-playing public institution in Louisiana at 60 percent.
“Our philosophy is to develop champions in the classroom, on the playing fields and in life,” said Louisiana Tech Athletics Director Tommy McClelland. “Louisiana Tech’s student-athletes simply complement the University’s impressive academic reputation in the state, region and nation. We are very proud of the hard work of all of our student-athletes as well as that of our faculty, coaches and staff.”
The GSR and federal rate calculations measure graduation in a six-year time frame from initial college enrollment. The most recent numbers released are based off of student-athletes who entered Louisiana Tech in 2007.
As an indication of graduation success, during the 2012 and 2013 seasons, Louisiana Tech had more players on its football roster who had already earned their bachelor’s degrees than any other program in the nation.
Individually, several Bulldog football players earned the Conference USA Commissioner’s Academic Medal during the 2013-2014 academic year. David Bellard, Sean Berman, Sterling Griffin, Blake Meredeth, Michael Mims and Xavier Woods received medals, which are presented to those Conference USA student-athletes who achieved a cumulative GPA of 3.75 or better.
The success of Louisiana Tech’s student-athletes in the classroom is not just limited to the football program. Fourteen of the 16 Division I sanctioned athletic programs recorded at least a 70 percent GSR, led by men’s golf, women’s basketball and women’s tennis with 100 percent scores. The Lady Techster basketball team’s GSR ranked first in the State of Louisiana and first in Conference USA. Louisiana Tech ranks 33rd among all Football Bowl Subdivision programs and seventh among non-AQ and non-US Armed Forces public institutions.
Another measure of academic success among student-athletes is the NCAA’s report of academic progress rates (APR), which provide a real-time look at a team’s academic success each term by tracking the academic progress of each student-athlete. In the most recent APR report released in May, 13 of Louisiana Tech’s programs earned a single-year rate above 930 for 2012-13 academic year. This was led by perfect 1000 scores in men’s basketball, men’s golf, women’s tennis and women’s bowling. The women’s bowling team earned an NCAA Public Recognition Award after their multi-year APR score ranked in the top 10 percent of all the women’s bowling programs in the nation.
“These types of impressive numbers can only be generated through a commitment by our student-athletes in the classroom,” McClelland said. “Our University and coaches place an emphasis on recruiting student-athletes who are committed to succeeding in the classroom.”