Louisiana Tech University held its annual Spring Career Day Thursday, with more than 100 employers gathering in the Student Center looking for interns and full-time employees from the university, and nearly 800 students attending the event.
“If you go to Career Day, you are one step ahead of several other graduates,” said Reghan Lopez, a Louisiana Tech alumna. 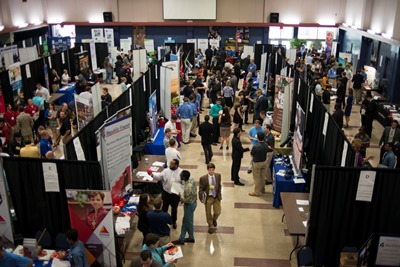 Lopez said she was so nervous that she almost decided not to go, however, due to what her parents may have said, she decided otherwise.
“The first conversation is always the hardest,” Lopez said. “But each one after that gets better and better.”
Lopez said she saw an employer booth for engineering majors and thought even though she was studying finance, she may as well give it a shot and break the ice.
“I had a great conversation with an employee who lived in the Houston/Katy area,” Lopez said. “Later on into the school year, in May, I was offered a summer internship.”
Lopez said she was eventually offered a full-time position at the company’s headquarters in Houston, and she credits the success she’s had to the event.
“Since I had a great conversation at Career Day, my resume was passed through,” Lopez said. “I was given the opportunity to show them why they should be looking for someone like myself.”
Ron Cathey, director of Counseling and Career Services at Tech, said the opportunities that the event offers to students is too great to pass up.
“Career Day is an interview, which is why we stress students to show up dressed professionally,” Cathey said.
Cathey said what employers learn about students at the event cannot all be read on a piece of paper they would normally only turn into them.
“The one-on-one, face-to-face conversations here are invaluable,” Cathey said. “Employers catch confidence and energy not seen on a resume.”
Lopez said the company she was hired to intern was not searching for someone with her major, nonetheless, she got the job because she decided to attend Career Day at Tech and converse with a company she later on would join.
Written by Alex Heard