Have you ever seen a bulldog run at over 180 miles per hour?
ARCA Racing Series driver Buster Graham is set to make that happen as he, along with his Roulo Brothers Racing team, will debut the No. 17 Louisiana Tech Bulldog Ford Fusion, Saturday at Daytona International Speedway in the Lucas Oil 200. 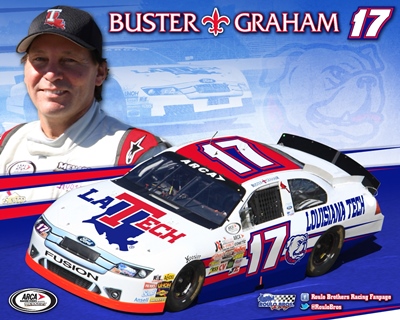 The race is the first in the ARCA Series’ 2015 season and will be televised nationally on FOX Sports 1 beginning at 3:00 p.m. CST.
Not only will the No. 17 stock car showcase Louisiana Tech, Graham and his crew will wear specially-designed race gear adorned with official Tech logos and colors. Even the driver’s helmet has been designed to resemble Louisiana Tech’s white football helmets from this past season.
This unique branding opportunity for Louisiana Tech was made possible through the generosity of a benefactor who connected the university with the race team. The supporter wanted to help promote the university by providing the resources needed to create the Tech-themed car wrap, team uniforms and apparel, and marketing materials.
“I’m thrilled to have the opportunity to drive the No. 17 Louisiana Tech car in this race,” said Graham. “It’s an honor to represent such an outstanding, upper tier university and to sport the Bulldog colors and logos. At the end of the race, I hope to be able to climb out of the car on Victory Lane and talk up Louisiana Tech. We are going to do our best to make the Bulldogs proud.” 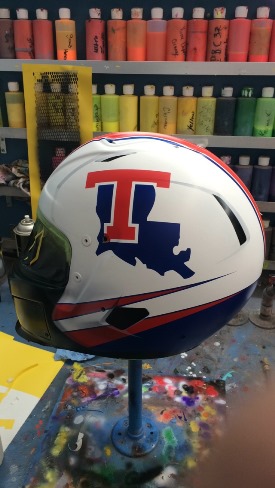 Before climbing into a stock car for Roulo Brothers Racing, Graham was a veteran of APBA Hydroplane Racing and Supercross. In 2012, he had a season-best tenth place finish at Michigan International Speedway and won the CSG Imaging Hard Charger Award, presented to the driver who gains the most positions from their starting spot throughout the race season. Graham earned a ninth-place finish in 2013 at Michigan International Speedway before joining with Roulo Racing in 2014.
“This is such an exciting opportunity for Louisiana Tech to expose its brand to a whole new segment of sports fans,” said Louisiana Tech President Les Guice. “We are extremely grateful to Buster Graham, his race team and sponsors, and the generosity of our supporters who made it possible for us to share our Bulldog pride and passion with race fans across the nation.”
The ARCA Racing Series is the premier division of the Automobile Racing Club of America. It is a professional league of stock car racing and is often used as a feeder series into the three national touring series of NASCAR. The ARCA Racing Series has a longstanding relationship with NASCAR, including using former Sprint Cup Series cars, hosting events in the same race weekend (such as “Daytona Speedweeks”) and has even named an award after NASCAR founder Bill France, Sr.
In addition to Saturday’s race at Daytona, Graham and the No. 17 Louisiana Tech Bulldog Ford Fusion is scheduled to race at Talladega Superspeedway on May 1 in the Talladega ARCA 200. Television times and coverage will be announced at a later date.