Buster Graham, driver of the No. 17 Louisiana Tech University Ford Fusion for Roulo Bros. Racing, participated in an autograph session on USS Alabama during Fan Fest for this weekend’s ARCA MOBILE 200. 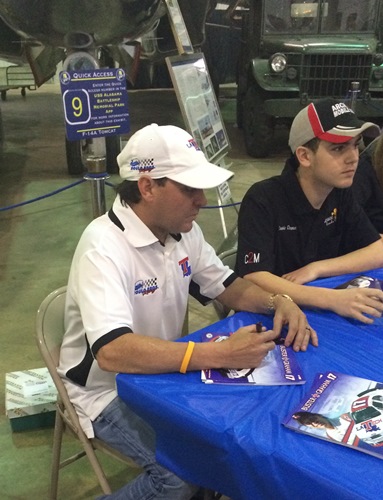 Buster Graham signs autographs for race fans on board the USS Alabama.

Although Graham will not be competing in this weekend’s race, Graham said he enjoys the opportunity to visit with the fans who come out to support the ARCA races.
“It’s an honor to represent Louisiana Tech at events like this,” said Graham. “I wish we were running this weekend because the Roulo Bros. have given me fast cars and I can’t wait to get back in the seat, but I am happy to be in Mobile to support this weekend’s event.”
Roulo Bros. Racing has established an outstanding record in both the ARCA Series and NASCAR. Roulo Bros. Racing leads all active teams in ARCA Series competition and is the 2012 ARCA Racing Series presented by Menards championship team after winning the title with Roush Fenway Racing development driver Chris Buescher. Roulo Bros. Racing is the only team in history of the ARCA Series to complete every possible lap of competition in a single season.
The team is led by owner Gary Roulo (2012 Cometic Crew Chief of the Year) and Russell Roulo (2011 and 2012 Klotz Engine Mechanic of the Year). Roulo Bros. Racing has proven track record in performance on the track and off building brands from small to large through consumer awareness, promotion, and business-to-business relationships.
Graham is scheduled to drive the No. 17 Louisiana Tech Ford Fusion at Talladega Superspeedway on May 1 in the Talladega ARCA 200.