Leo Honeycutt, author of “The Clarke Williams Story: How one man’s belief in the Golden Rule transformed a small phone company into CenturyLink,” will join Glen Post, president and CEO of CenturyLink and alumnus of Louisiana Tech University, at 5:00 p.m., April 16 in Wyly Auditorium on the Louisiana Tech campus for a presentation and book signing event to highlight Williams’ vision and achievements. 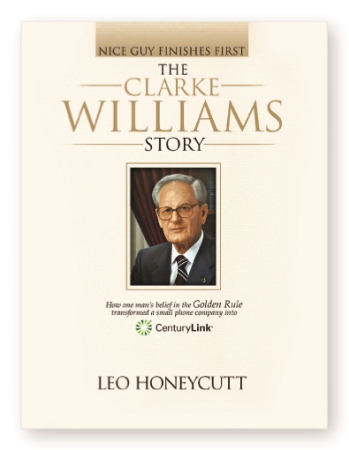 Honeycutt and Post, along with Carolyn Perry, daughter of Williams, and Harvey Perry, Williams’ son-in-law and vice chairman of CenturyLink’s Board of Directors, will share the story of how Clarke Williams built a tiny bankrupt telephone company into America’s telecommunications giant CenturyLink on one simple belief: If you treat others as you would like to be treated, you will soon have legions of loyal employees and customers who will build with you.
The event is free to attend and the public is cordially invited to come and hear this inspiring story of one of Louisiana’s true visionaries and entrepreneurs.
In the era of the Great Depression, William’s parents bought Oak Ridge Telephone Company for a mere $500, and as an 8-year-old, he spent many days on his bicycle collecting monthly bills. When he returned from World War II, Williams’ parents gave him and his new bride the unprofitable phone company as a wedding gift. At the time, the company had a total of 75 customers and Williams’ wife, Mary Kathryn, worked the switchboard from their living room while raising three children.
During the early days and facing steep challenges, Williams’ kept prayer as part of his decision-making, treated everyone as he would like to be treated, and put others first. As a result, Century Telephone grew through a series of phenomenal miracles. This $20 billion company today proves the paradox that if you put the interests of others ahead of your own, you are the one rewarded.
“The story of CenturyLink is one long string of miracles,” says Post. “Mr. Williams’ life still teaches me two things: Be kind and true in all dealings, and anyone can learn to succeed. The opposite of a cutthroat negotiator, Clarke Williams became famous for making acquisitions by insisting to sellers, ‘If this deal isn’t good for you, I don’t want to do it.’”
Williams passed away in 2002 and Perry feared her father’s incredible story of faith and miracles would be forgotten. Honeycutt, a renowned author and biographer, has worked for several years to preserve Williams’ stories and legacy for future generations. “[Williams’] is a fascinating, inspirational story inside the fascinating story of the chaotic way we got telephones in the first place,” says Honeycutt. “In many ways, like Alexander Graham Bell, Clarke Williams always had faith when nobody else did.”
“The Clarke Williams Story: How one man’s belief in the Golden Rule transformed a small phone company into CenturyLink” is available for purchase online at www.clarkewilliamscenturylink.com.