Corre Stegall, former vice president for university advancement who recently retired after a distinguished 25-year career, served as keynote speaker Thursday morning for Louisiana Tech’s 313th commencement ceremony at the Thomas Assembly Center.
Louisiana Tech President Les Guice honored the graduates with the awarding of 287 degrees including 18 doctorates. Before conferring their degrees, Guice told the graduates that this was a day to treasure for the rest of their lives. 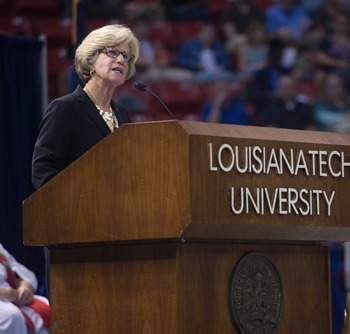 “Many of those who began their college careers with you are not here today,” Guice said. “You set goals and you devoted yourself to countless hours of studies and research. You’ve made friendships that will last a lifetime and created incredible lasting memories of your time at Louisiana Tech. As you move on in life, you’ll forget many of the details from this ceremony, but you’ll never forget this day.”
Stegall, a 1966 alumnae of Louisiana Tech earning a bachelor’s and master’s degree in education, retired in July following a career as an English professor, alumni and development director and vice president of advancement. In 2002, she became the first female vice president in Louisiana Tech’s history.
As Stegall began her keynote speech, she admitted her astonishment at being asked to do so.
“I’m honored and amazed that the president asked me to be here today, and in talking to some of you in line before we started, I found out I’m not the only one. Some of you are amazed you’re here, too,” Stegall said as many of the graduates chuckled.
Much of Stegall’s speech was based on Louisiana Tech’s 12 guiding principles known as the Tenets of Tech: confidence, excellence, commitment, knowledge, integrity, respect, leadership, loyalty, enthusiasm, caring, hope and pride. 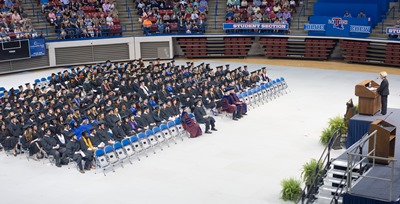 “At the freshman convocation we hold each fall, new students are asked to sign a pledge to embrace these principles – these tenets – and make them a part of every aspect of their lives,” Stegall said. “Every time the school year starts, I see a little apprehension and a whole lot of determination to live up to that pledge. You were given a medallion during that convocation and at the end you deposited it in the Lady of the Mist fountain. You had a promise that when you graduated you would see that medallion again. And you will see and hold it today as we present it back to you. Only this time the date of your graduation will be engraved on it.
“It represents a promise made to you and a promise made by Tech – promises kept.”
Stegall told the graduates that by embracing those tenets, they were preparing themselves for their all aspects lives ahead following graduation.
“While you were learning how to make a living, you were also learning how to live,” Stegall said.
Following her speech, Guice read a proclamation from the Louisiana legislature presented by State Rep. Rob Shadoin honoring Stegall for her 25 years of service to Louisiana Tech.
Then Guice made a presentation of his own, naming Stegall as Louisiana Tech vice president emeritus.
“It’s hard to do anything around here without Corre knowing about it,” Guice said. “She loves surprising people and doing this kind of thing, but she doesn’t like being on the receiving end. She has meant so much to Louisiana Tech in so many ways – she is very deserving of this honor.”
Written by T. Scott Boatright – boat@latech.edu