Louisiana Tech ranked No. 1 again in state in mid-career salaries for graduates 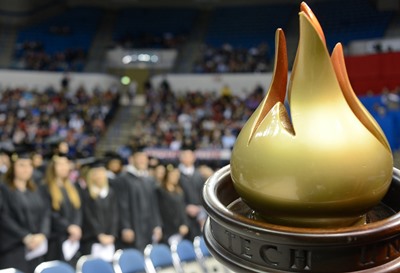 In addition to leading the State of Louisiana, Louisiana Tech is ranked in the No. 70 in the nation in median mid-career earnings among graduates from public institutions, and No. 91 in the nation among research universities.
In PayScale.com’s rankings for average early career salaries for graduates, Louisiana Tech was second in the state with $47,000. Louisiana State was first at $48,900 and McNeese State University was third with $46,900.
“Students that attend Louisiana Tech come here with high expectations that our faculty will help them to develop the knowledge and skills needed to become highly successful in their chosen careers,” said Louisiana Tech President Les Guice. “Meeting and exceeding these expectations is at the core of our commitment to these students and we are pleased to see this effort being recognized in a number of national rankings and reports. I congratulate our faculty and staff on this achievement, and applaud them for their continued dedication to preparing our students to be successful professionals.”
PayScale.com classifies early career graduates as those who are employed full-time with five years of experience or less in their career or field, and who hold a bachelor’s degree and no higher degrees. Mid-career graduates are employed full-time and have at least 10 years of experience in their career or field, and who hold a bachelor’s degree and no higher degrees.
According to PayScale.com, the 2015-2016 College Salary Report includes over 1,000 schools, which is representative of institutions that enroll over 75 percent of the estimated undergraduates in bachelor’s degree programs in the U.S. The report, which analyzes the company’s database of more than 40 million unique compensation profiles, provides a critical perspective on the relationship between college selection and post-graduation salaries.
In addition to their College Salary Report, PayScale.com has recognized Louisiana Tech as the state’s top institution in their College ROI Report released in March. Louisiana Tech earned the state’s highest ranking in both annual percent ROI and 20-year net ROI for students living on campus and receiving financial aid, and who are paying in-state or out-of-state tuition.
Louisiana Tech ranking by PayScale.com is yet another example of the national and international attention and recognition the university has recently earned. Most recently, Tech was ranked among the top universities in the nation in Forbes’ list of America’s Top Colleges 2015, and among the top 2.6 percent of the world’s degree-granting institutions by the Center for World University Rankings.
PayScale.com’s complete 2015-2016 College Salary Report can be seen by visiting http://www.payscale.com/college-salary-report.